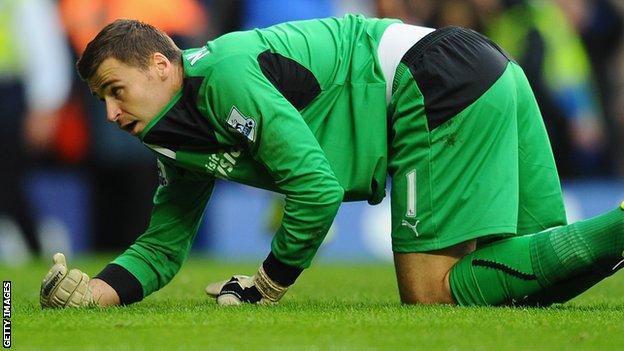 Eden Hazard scored after Samuel Eto'o kicked the ball away as Marshall bounced it, which according to Fifa's rules is a foul.

"Goals change games - it was a silly goal to lose," Marshall said. "I'm just gutted that it's affected everybody."

Cardiff had taken the lead on 10 minutes when Jordon Mutch ran through to score after David Luiz's mistake - but the controversy came in the 33rd minute.

"It's a habit of mine," added Scotland international Marshall. "I always bounce the ball before kicking the ball so [it's] probably my fault."

Goals from Eto'o, Oscar and a second from Hazard after half-time sealed victory but Marshall said defeat was harsh on Cardiff and he felt the tactics had "frustrated" Chelsea up until the crucial equaliser.

"It's just disappointing because we had a game plan and it was working up until then," he said.

"They're always going to have chances at some point and we knew we would have to defend well. I thought the boys were fantastic in front of me.

"I've apologised to the boys at half-time. I was just disappointed to lose it."

Despite his disappointment, Marshall said Cardiff must forget the Chelsea defeat as they prepare for next Saturday's trip to Norwich City.

Norwich, Marshall's former club, lost 4-1 at Arsenal on Saturday and are in the bottom three - two places and a point behind Cardiff.

"We've got Norwich coming up now which is a massive game," Marshall said.