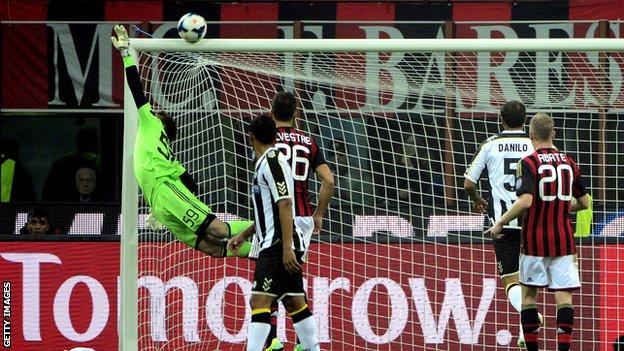 AC Milan returned to winning ways ahead of Tuesday's Champions League game with Barcelona as Valter Birsa's goal secured a 1-0 victory over Udinese.

Slovenia midfielder Birsa settled a drab match with a rare moment of quality by curling a delightful shot from 22 yards beyond the goalkeeper.

Antonio Di Natale thought he had equalised for Udinese from a free-kick which was tipped onto the bar.

The win lifted Milan to eighth in Serie A, 13 points behind leaders Roma.

It was only their third league win of the season and included a 20-minute cameo from Brazilian Kaka, back from injury.

Elsewhere on Saturday, Cagliari came from behind to beat 10-man Catania 2-1, Mauricio Pinilla scoring the winner seven minutes from time.