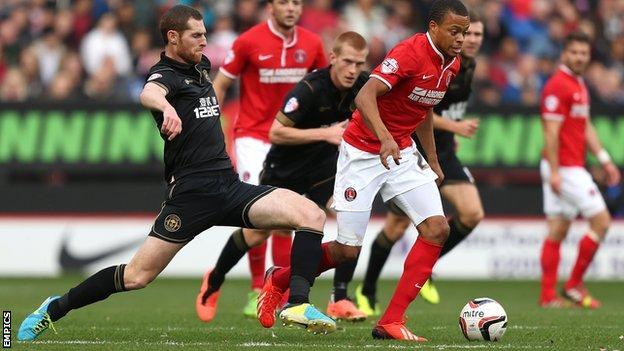 Goalkeeper Lee Nicholls was Wigan's hero as they battled to a draw at Charlton in the Championship.

The 21-year-old was thrust into a league debut when regular keeper Scott Carson injured an ankle in the warm-up.

Nicholls pulled off a string of fine saves to frustrate the Addicks in the first half, including a spectacular stop from a Richard Wood header.

Wigan went in search of a rare away win after the break only to be denied by the woodwork.

The draw leaves Charlton unbeaten in four but still languishing in 19th, while Wigan rise to 14th with games in hand on their rivals.

Latics keeper Nicholls's only previous appearance for the club came in August in the Capital One Cup, when Manchester City thumped five past him.

But he showed no sign of nerves as he was tested early on.

Bradley Pritchard was twice smartly denied by the debutant, and it should have been third time lucky for the Addicks midfielder on the half-hour but he missed a decent opportunity to put the hosts ahead.

Cameron Stewart jinked his way to the byeline and pulled the ball back for Pritchard, who had a free shot from the penalty spot but sent it over the crossbar.

Things got worse for Charlton moments later when striker Yann Kermorgant suffered a recurrence of the ankle injury that had kept him out for the previous month and limped off.

And Nicholls pulled off another stunning save just before half-time when he clawed out Wood's point-blank header from Dale Stephens' corner.

Wigan, still getting to grips with combining their Thursday Europa League outings with a promotion bid, enjoyed plenty of early possession but too often their final ball was lacking.

Their only opportunity of note in the first half was a header from Grant Holt, which he directed straight at Ben Hamer.

The visitors improved vastly after the break, but not before Nicholls was beaten by a 20-yard rocket from Stephens which fortunately for the youngster flew inches wide of his right-hand post.

Charlton had a huge let-off moments later when Chris McCann met Ben Watson's corner with a powerful header that crashed off the underside of the crossbar and bounced to safety.

Hamer then saved low down from Leon Barnett and Emmerson Boyce volleyed narrowly wide from another Watson corner.

James McCarthy fired over from the edge of the box, Watson shot wastefully wide and Holt's goalbound effort was blocked by Wood, leaving Charlton more grateful for the point by the end.