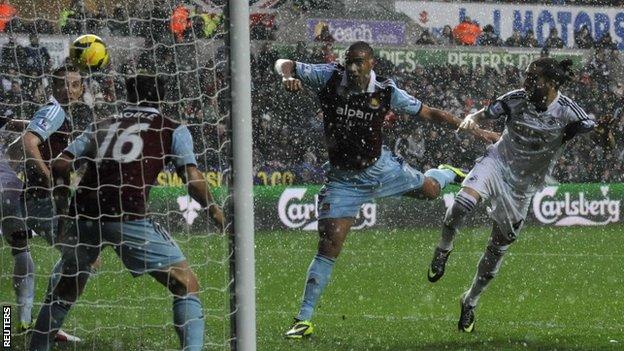 Swansea and West Ham settled for a point in a match that contained few clear-cut opportunities at a rain-drenched Liberty Stadium.

West Ham created more chances than the home side with Stewart Downing forcing saves from Michel Vorm who then almost punched the ball into his own net.

The Bony chance was the only effort of note in a second half that failed to match a relatively entertaining first 45 minutes.

Swans manager Michael Laudrup may be left perplexed at his side's lack of attacking endeavour in their first goalless draw of the season, while counterpart Sam Allardyce will have been disappointed by the Hammers' wastefulness in front of goal.

The point lifts West Ham up to 15th, while the Swans, who made seven changes from the side that started against Kuban Krasnodar in the Europa League on Thursday, go ninth.

Flores drew a point-blank save from Jaaskelainen but that was the only effort of note from Laudrup's side during a first 45 minutes which the Hammers controlled.

The visitors had only scored in one of their past five away league games but winger Downing did his best to remedy that, twice forcing good saves from Vorm in the first half.

There followed a howler by the Dutch keeper when he fisted a clearance towards his own net and was only spared embarrassment by the athleticism of defender Angel Rangel, who cleared.

England Under-21 international Morrison, an outside bet for a place in the senior squad for Brazil, also tested the Swansea goal with a low angled strike that just drifted past the left-hand upright, while Guy Demel scooped over from six yards.

Both managers made tactical changes in attack midway through the second half after an uninspiring spell following the restart.

Allardyce brought on striker Carlton Cole for his first appearance of his second spell with the club, while Laudrup sent on Ivorian Bony.

And it was last season's Dutch league top scorer Bony who had the best and only opportunity of the half when his fierce strike from eight yards was tipped over by the ever-alert Jaaskelainen.

"I knew it would be very difficult as they enjoyed huge success playing like this against Tottenham, when they won 3-0 [previous away fixture].

"We knew they would play without a striker and with six in midfield and it is difficult.

"You also know they are so good at set-pieces and we had some problems when they had four or five in succession in the first half.

"We don't have the tallest guys but in the second half, despite not being at our best, we controlled it."

"We should have had it over and done with by half-time.

"We showed our classic counter-attacking football, but unfortunately our finishing qualities let us down.

"We limited Swansea to one header from a set-piece. In the second half we didn't pass it as well as in the first. It's disappointing.

"It's our fifth clean sheet in nine matches but we have only nine points in total and that's not good enough."