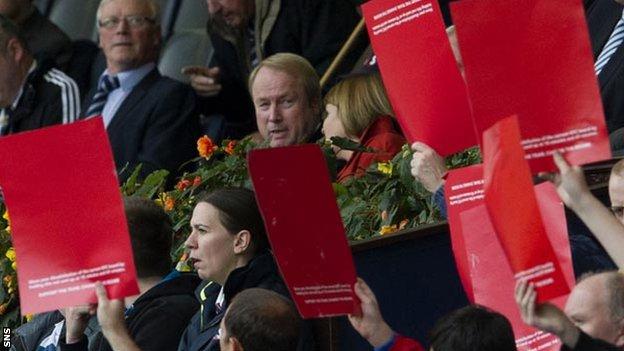 Kilmarnock chairman Michael Johnston says he would step aside from his position if the right investors can be attracted to Rugby Park.

But he insisted to BBC Scotland that he is open to change.

"I'm looking for more local business people to work in partnership for the benefit of the club," said Johnston.

"Billy Bowie is the first person since the Moffat family to table an offer of finance."

Johnston, who inherited the Scottish Premiership club from the Moffats, revealed that had invested £200,000 in Kilmarnock, with a further £1.1m promised.

The chairman believes he has more to achieve before leaving Kilmarnock and intends reducing debts of around £9m.

However, he admitted that, if new investors offer the right money, he would consider his position.

Johnston has and the group is understood to be set to present its takeover plan to the Kilmarnock chairman shortly.

Bowie is also believed to be open to working with the consortium headed up by Alan McLeish from the club's kit sponsor, QTS.

The 2-0 victory over County was Kilmarnock's first of the season and the first for Allan Johnston, who was appointed manager in the summer.

Supporters held up red cards in the 18th and 69th minutes, symbolic of when the club was founded in 1869, in protest at the chairman's running of the club.