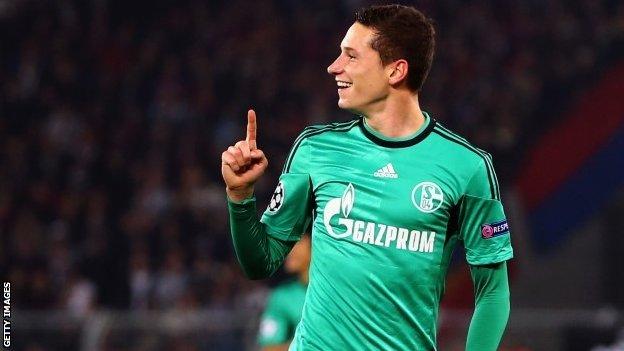 Schalke midfielder Julian Draxler says he rejected a move to the Premier League this summer in order to remain with the Bundesliga club.

The Germany international, 20, who is set to face Chelsea in the Champions League on Tuesday, is regarded as one of his country's brightest prospects.

"There were offers from England, but I stayed because I was certain to play in World Cup year," he told BBC Sport.

"However, you never know what will happen in the future."

When asked which Premier League club he would like to join, Draxler said: "I have my favourite team, but I am at Schalke and I don't want to talk about other clubs.

"If I state it's Arsenal or Manchester United then maybe I'll be reading it in the newspapers tomorrow."

The Gelsenkirchen-based player signed a new five-year deal with Schalke in May. According to reports, the contract contains a 45m euros (£38m) buyout clause - understood to be the biggest in German football.

He can play both on the left and in a central attacking midfield role. But such is the strength in depth in that position in the national team, Draxler was an unused substitute in the recent 3-0 win over Republic of Ireland and only featured in the last eight minutes of the final World Cup qualifier against Sweden.

However, barring an injury, he will start against Chelsea and is looking forward to facing compatriot Andre Schurrle, who moved from Bayer Leverkusen to Stamford Bridge in the summer.

"It's going well for him. It's not easy to go to England from Germany. I hope I'll be able to play against him on Tuesday."

Coach Jens Keller's Schalke sit at the top of Group E following victories over Steaua Bucharest and Basel. Draxler scored in both matches, including a sublime half-volley in the 1-0 win over the Swiss side.

Chelsea, on the other hand, were defeated by Basel at home before thrashing Steaua 4-0.

Draxler is confident his side can make it three wins out of three, before they travel to west London for the return fixture.

"I don't think Chelsea will be surprised by how good we are," he added.

"Mourinho will tell his side how strong we are. He's one of the best coaches if not the best coach in the world. It will be a difficult game, but we are at home and we've won the first two matches. We can beat Chelsea."