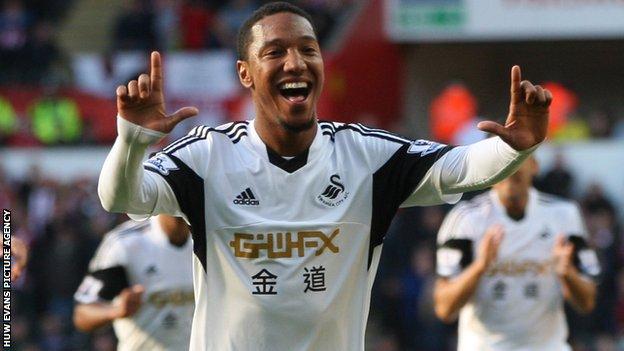 Jonathan de Guzman says he is fully focused on Swansea before he can start thinking about next summer's World Cup.

The Netherlands midfielder scored Swansea's second goal in a 4-0 win over struggling Sunderland at the Liberty Stadium.

And the on-loan Villarreal player hopes his performances for Swansea this season will secure a place in the Netherlands' World Cup squad.

"The World Cup is at the back of my mind," De Guzman said.

"Right now I'm focused on Swansea, getting my minutes and playing. Hopefully that will get my ticket to Brazil."

Canadian-born de Guzman has won six caps for the Netherlands but did not feature in their recent World Cup qualifiers against Hungary and Turkey.

De Guzman scored a spectacular goal in Swansea's 4-0 win over Sunderland and admitted the second-half performance was an improvement on the first 45 minutes.

Victory over the Premier League's bottom side, who had new manager Gus Poyet at the helm for the first time, was Swansea's first home league win since March.

"I think the first half was a bit sloppy with the passing and I I think in the second half we raised the tempo a bit with the movement off the ball," de Guzman added.

"We got rewarded - we got four goals in one half so it was very good for us. [It was] a deserved win."

Swansea are top of Group A after wins over Valencia and St Gallen, and victory over the bottom side would put them in a strong position to reach the last 32.

"With nine points in three games we'll have one foot in the knockout stages," De Guzman said.

"I know they beat my ex-club [Feyenoord] in the qualification round but other than that I don't know that much.

"Of course that is what our staff is here for, to prepare us for these games and watch the videos of the teams.