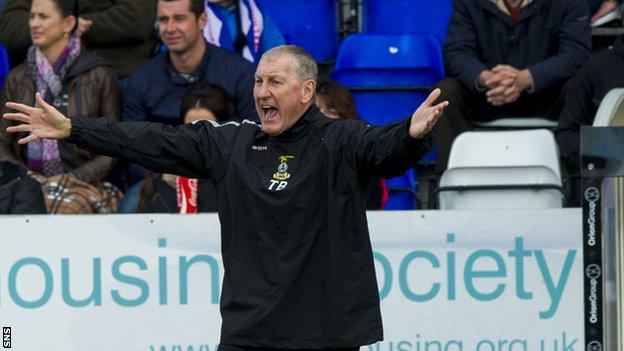 In a controversial encounter, Kris Doolan's double secured the three points for the visitors as Butcher's men suffered their first home defeat of the season.

"It was bizarre because we lost the game," Butcher told BBC Scotland.

"I still can't work out how we lost it. We should have at least had a point, if not three."

We've had great opportunities: we hit the post and we had what we feel was a good goal disallowed in the first half

Inverness had a couple of good chances early on as Aaron Doran went close from a free kick before Ben Greenhalgh's effort hit the post.

However, Partick took the lead when Doolan fired home after a cutback from James Craigen.

Gary Warren then equalised for the hosts, but it mattered little as goalkeeper Dean Brill gifted Doolan the winner before the end.

"We've had great opportunities: we hit the post and we had what we feel was a good goal disallowed in the first half," Butcher said.

"It was just one of those games where it wasn't going to happen for us and then we get a sucker punch at the other end.

"Dean Brill, who has been absolutely magnificent for us all season, makes his first mistake at the club and it has cost us three points.

"But it wasn't just Dean's mistake, we were very haphazard in the final third.

"I'm really disappointed to lose a game which we should have got at least a point from."

The game's talking point came just before interval when a training ground corner routine had Inverness on level terms, but referee Euan Norris forced the set-piece to be retaken.

"I went into the referee's dressing-room after the game and he said that the assistant referee said that Ross Draper had touched the ball twice and the play shouldn't have been allowed to continue," said Butcher.

"But we didn't see his flag up or any of their players appeal and we played on for about another 10-12 seconds and the ball goes in the back of the net.

"Then he is standing there with his flag up and then I'm thinking perhaps Billy is offside.

"But we're adamant that the linesman said 'that's OK'. So, as far as we are concerned, Ross Draper had touched it and then it was all about Aaron Doran putting the ball in the box."