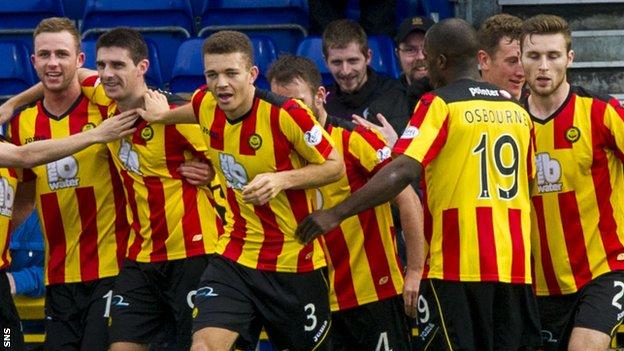 Kris Doolan grabbed all three points for the visitors as they came away from the Caledonian Stadium with a 2-1 victory.

"I thought it was a perfect away performance, similar to the Ross County one," Archibald told BBC Scotland.

"The lads showed great character to come back after losing a goal so early in the second half."

Kris Doolan's had a lot of criticism - a bit unduly I thought - because he had two goals before the game, which is similar to other strikers in the league

In a match filled with controversy, Doolan put the Jags ahead before Gary Warren equalised for the hosts.

Both sides had further chances in the match, but it was Inverness goalkeeper Dean Brill who provided the 26-year-old Doolan with a simple tap-in that ultimately cost Terry Butcher's men their perfect home record.

Archibald was delighted with the way his side responded after the initial second-half setback.

"It was sore to take, but they bounced back and showed great desire to go and win the game - especially to see out the last five minutes," he said.

"Terry makes it hard for teams to come here. They throw everything at you with long throws and corners and make it very physical."

The Jags boss was particularly pleased for Doolan, who he felt had been the target of unfair criticism in recent weeks for their profligacy in front of goal.

"Doolan scored a very good goal," Archibald continued. "He's had a lot of criticism - a bit unduly I thought - because he had two goals before the game, which is similar to other strikers in the league.

"I think it was because we were creating enough chances without scoring enough goals and we got a slice of luck with the second one, which I think we deserved."

On the game's controversial moment, when Inverness had to re-take a corner from which they had scored, Archibald believes the right decision was made.

"I couldn't see it from where I was, but James Craigen said at half-time that the player moved the ball and then James went to go and get it because he saw him move," Archibald said.

"But the linesman said 'no, he has not took it'. Fair play to the linesman as I think there was a bit of a delay, but then he went back and gave it."

With games against Aberdeen and Celtic to come, the Partick manager was aware of the importance of getting a positive result in the Highlands.

"It's a massive lift," Archibald added. "A lot of people have made out that we have hard games coming up, but it's a great start as this isn't an easy place to come.

"They are a good side and we're absolutely delighted."