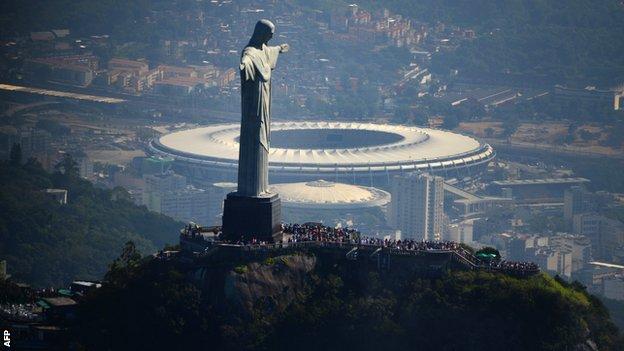 Former world champions France have been drawn against Ukraine in the European play-offs for the 2014 World Cup.

Portugal face Sweden, which means either Cristiano Ronaldo or Zlatan Ibrahimovic will not take part in next summer's tournament in Brazil.

Iceland, the lowest-ranked team in the play-offs, must beat Croatia to reach their first ever major tournament, while Greece meet Romania.

The two-legged ties will be played on 15 November and 19 November.

The eight nations all finished second in the qualifying groups, with 1998 World Cup winners France runners-up to current holders Spain in Group I.

"We were not seeded and could have played Portugal or Croatia who have a long history, but Ukraine is not a simple draw either," said France coach Didier Deschamps, who captained them to their 1998 triumph, told Eurosport.

"They are on a run of seven matches without defeat and they concede very few goals as well as a long trip over there, but it's good to have the return leg at home."

Defender Artem Fedetskiy said: "After a poor start in the qualifying campaign every single match for us was like the final, like a do-or-die mission.

"Now we have serious experience of playing the most important matches. We are a cohesive team now and, I believe, we have fair chances to go through."

Portugal, Greece, Croatia and Ukraine were the four seeded teams in the draw which took place on Monday.

"We have been drawn against a Sweden team against whom we will be playing two complicated and relatively balanced matches," said Portugal coach Paulo Bento.

"Besides having one of the best strikers in the world (Ibrahimovic), the quality of their team is their collective spirit."

Greece coach Fernando Santos admitted he was disappointed to be playing their first match at home.

He said: "The Romanians are of great quality and dangerous and difficult opponents. I would have preferred the first match to be away."

The four teams that qualify will complete a total of 13 European nations at the tournament in Brazil.