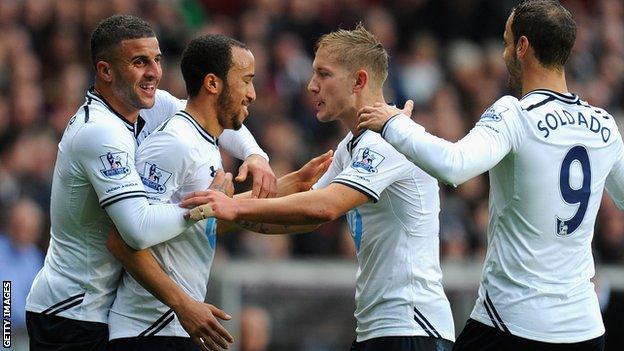 The Andros Townsend bandwagon is gathering momentum at a pace that is securing his place firmly in the priorities of Tottenham and England.

Townsend came out of left field - or in a strictly football context right-field - as a resounding selection success for England manager Roy Hodgson with two outstanding performances in the World Cup qualifying wins against Montenegro and Poland that secured their place in Brazil next summer.

And when he returned to club duties for Spurs at rain-soaked Villa Park on Sunday, he demonstrated the same verve and desire to take the direct route to goal that marks him out as England's man of the moment.

The 22-year-old's current status at Tottenham was confirmed when fit-again Aaron Lennon entered as a substitute after 66 minutes. Spurs were leading Aston Villa 1-0, thanks to Townsend's fortunate goal, and looking to close out a win that would take them up to fifth place in the Premier League.

Not so long ago, Lennon was the man who had the place on Spurs' right flank nailed down and harboured ambitions of doing the same for England after a somewhat unfulfilled international career.

On this occasion, Lennon, no mean winger and in possession of burning pace, was deputed to left. There was no moving Townsend as his tormenting of Villa defender Antonio Luna was just entering full flow.

And it was in that last 25 minutes in particular that Townsend showed he may be a real talent to be reckoned with, not someone enjoying a fleeting taste of wild-card fame.

It helps to be lucky too. And he certainly was when he put the visitors ahead in the 2-0 win with a 31st-minute cross that was almost respectfully allowed to end up in the back of the net untouched by Spurs colleagues, Villa's defence and goalkeeper Brad Guzan.

Sadly, the goal was the signal for a very unsavoury aspect to the afternoon as a smoke bomb flare was thrown from high in the Doug Ellis Stand where Spurs fans were housed, resulting in a direct hit between the shoulders of referee's assistant Dave Bryan, who was understandably shocked.

Bryan luckily escaped serious injury and was able to carry on, but this once again highlighted the perils of the relatively recent infiltration of these pyrotechnics into the English game and provided another investigation for the Football Association's over-crowded 'in tray'.

Townsend's performance was the acceptable face of a game that demonstrated the sheer strength of the squad available to Spurs manager Andre Villas-Boas as his side responded perfectly to the shock 3-0 home defeat by West Ham United.

He is a player who has learned the lessons of his loan spell at QPR last season and applied them to move his career on to its next stage at Spurs and with England.

Townsend is the identikit winger. He is quick, has a variety of delivery and is willing to try his luck with what his becoming a trademark switch inside, a habit that had more than one Villa Park onlooker talking about shades of Arjen Robben.

The right foot can be of service too, as Montenegro found with his spectacular long-range finish in the 4-1 win at Wembley.

He scored one and could have set up others with a cross that flew across the face of goal without being touched and another that should have brought rewards only for Paulinho to fail to show the necessary conviction with a six-yard header.

Of course, there must be a guard against overhype and Townsend is enjoying a hot streak. Villas-Boas was in no mood to draw the slightest comparison with the departed Gareth Bale, pointing out that the youngster's career is still in its infancy.

Villas-Boas was happy enough, however, to portray Townsend as fearless, unconcerned about the competition he faces, grounded and someone who has returned to White Hart Lane from Loftus Road with a drive to succeed in the Premier League.

There will inevitably be dips, but all the raw materials look to be in place for Villas-Boas and Hodgson to work with. At the very least Townsend is a welcome, perhaps even unexpected, addition to the attacking options under consideration by those two men.

One of Villas-Boas' most important balancing acts this season will be to successfully deploy the squad he has strengthened in numbers with the £85.3m brought in for Bale from Real Madrid.

How often he pulls this off correctly may decide the shape of Spurs' season and its eventual success. Villas-Boas got the calls right at Villa Park.

Jermain Defoe has had his supporters, especially after scoring twice in Spurs' 4-0 win at Villa Park in the League Cup, but Villas-Boas stuck with Roberto Soldado.

The decision was justified when the Spaniard rounded off sweet approach work by Lewis Holtby and Paulinho to send an unerring strike past Guzan. It was a build-up and finish that carried the hallmark of quality.

The selection of the industrious Holtby ahead of the more creative Christian Eriksen to combat Villa's work-rate and pressing also paid off, while arguably the biggest bonus was the return of midfielder Sandro for the first time since undergoing knee surgery in January.

Sandro and Paulinho offer presence and power in midfield, as does Moussa Dembele, who made a 10-minute appearance as a substitute.

It was hardly a classic Spurs performance, but it offered further evidence of the talent and strength at the disposal of Villas-Boas - the perfect environment for Townsend to continue to flourish.