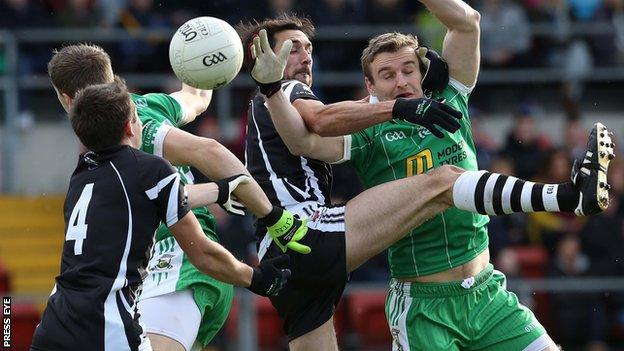 Three injury-time points helped Kilcoo snatch a 0-9 to 0-7 victory to retain their Down Club title in Newry.

Burren led by 0-7 to 0-6 as three minutes of stoppage time were signalled and Darragh O'Hanlon converted a huge 50-metre free to draw the sides level.

Paul Devlin then landed the decisive free and added an insurance point from play with the last kick of the game.

It was Kilcoo's third Down county title in the last five years, and they will now face the Armagh champions in an Ulster club quarter-final on 3 November.

Burren led 0-3 to 0-1 after 16 minutes with points from Jamie McGovern, a Donal O'Hare free and a James McGovern point.

Kilcoo only had a free from Paul Devlin to show for their efforts until they finished with a flurry of three points in the last four minutes of the opening half.

Wing-back Darragh O'Hanlon burst through the wall of bodies and hit a low shot across the goalkeeper but the ball crashed off the upright.

Ryan Johnston scooped up the rebound to score their first point from play in the 26th minute.

Burren didn't score for 25 minutes either side of half-time but did lead by a point twice in the second-half.

Points from Kevin McKernan and Jamie McGovern put their noses in front on two occasions.

However Kilcoo, renowned for edging tight games, finished strongly again, scoring one third of their entire tally in injury-time to retain the championship.