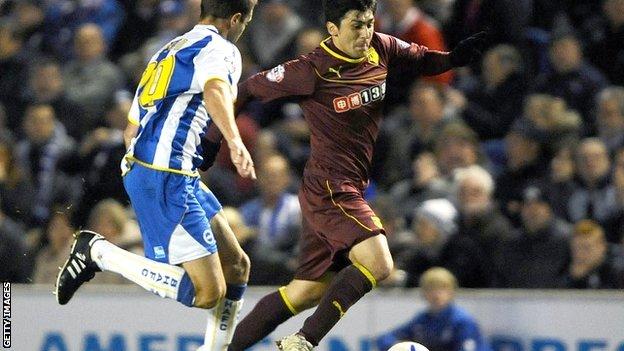 A superb Andrew Crofts strike saved Brighton a point after Watford were controversially denied a goal.

Watford were ahead after four minutes as Sean Murray's 20-yard shot deflected into the bottom corner off the head of Brighton defender Stephen Ward.

Shortly after the interval, Fernando Forestieri's shot looked to have crossed the line but was not given.

Brighton capitalised as Crofts hooked a loose ball into the top corner, while a Forestieri header hit a post late on.

Kick-off was delayed because of traffic problems but Watford wasted little time in the pursuit of a victory that would have taken them into the play-off places.

They hustled their hosts from the outset and, after Murray's effort squirmed in, might have extended their lead when Brighton were caught in possession, but Lewis McGugan curled narrowly wide of the post.

However Brighton, who had scored only twice in a run of four games without a win, generally looked the more dangerous, with winger Will Buckley influential on the right flank against his former club.

His cut-back was met powerfully by the head of Ashley Barnes but Hornets goalkeeper Manuel Almunia clawed the ball out acrobatically.

Another teasing Buckley cross found Craig Conway but he could not direct his header on target.

The early stages of the second period proved crucial, with Watford convinced they had secured a two-goal cushion when diminutive striker Forestieri ghosted through.

Brighton keeper Tomasz Kuszczak could not keep out his shot and it appeared to trickle over the line before defender Gordon Greer could scramble the ball away. But with no goalline technology in the Championship, the goal was not awarded.

To compound Watford's frustration, Crofts equalised when a corner was not properly cleared, thundering the ball into the net from 12 yards.

Both sides introduced attacking options in the closing stages, which produced an exciting finale.

Forestieri rose above the defenders to head back across goal but the ball drifted against the upright and was cleared.

At the other end, a sweetly-struck Crofts effort from just inside the area was smartly turned around the post by a diving Almunia as honours deservedly finished even on the south coast.

Watford boss Gianfranco Zola on the Forestieri 'no goal':

"There's no doubt about it, it was definitely a goal.

"Everyone has seen it apart from the referee and the officials. That is the disappointing part, the goal did not happen in a crowded area, there was only the player, the ball and the line and it has not been seen.

"I am disappointed because it would have given us three points. In a league in which so much money is involved - they say it's £120m for the teams that go up - it (technology) would help the officials keep everything under control.

"If it is something we can use to make the game better why not? After today I would like it to be at least considered."

"We played well in the first half and deserved more than to go in 1-0 down.

"In the second half, they had chances and so did we.

"It's not the first time the opposition has scored with a deflection against us this season, but I'm happy with the reaction of my players and how they played against one of the best teams in the Championship."

On the Forestieri incident: "From my position it was impossible to see. I didn't ask Gordon [Greer] about it."