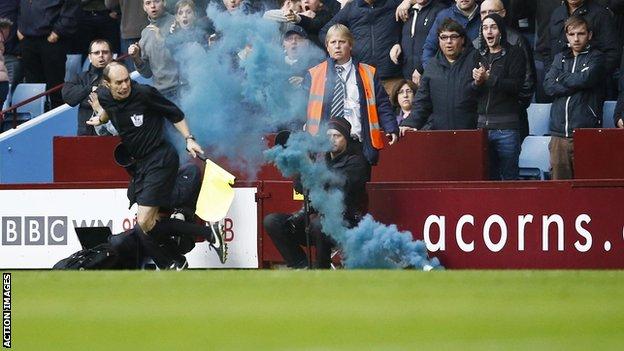 Police say the rising number of flares being taken into football grounds by supporters is "a real worry".

Assistant referee David Bryan was hit by a flare during Sunday's match between Aston Villa and Tottenham.

The head of football policing for the Association of Chief Police Officers, Andy Holt, said he was "anxious" to crack down on the problem.

He told BBC Radio 5 live: "It is not appropriate to let off smoke flares or fireworks inside a stadium."

The Football Association has launched an investigation into the incident at Villa Park.

Two men aged 25 and 47 were arrested over the matter by West Midlands police and have been released on bail pending further enquiries.

Deputy chief constable Holt said: "Last year, we saw an increase in the use of flares and pyrotechnic devices by nearly 140% compared to the previous season.

"Arrests for the possession of a firework or a flare were up more than 150%, so it is certainly something we are seeing becoming more prevalent in today's game and it's a real worry for us.

"It is prevalent abroad and I would argue they have a greater problem than we do in this country. But I'm anxious that we don't head the same way and it does not become embedded in the culture of English football.

"It is no way appropriate to let off either smoke flares or fireworks inside a stadium. Those that argue that it gives a European flavour to the occasion are plain wrong."

Bryan was struck on the back of the neck by a flare thrown from part of the ground where Tottenham supporters were seated. It was thrown moments after Andros Townsend gave Spurs the lead in the first half.

Bryan was able to continue without treatment, although smoke from the flare delayed the restart of the game.

In May, a 15-year-old boy suffered lung damage from a smoke bomb thrown during Villa's game at Wigan.

The boy needed hospital treatment, while two women, aged 22 and 24, also required attention for the effects of the device, which was lit during the 2-2 draw.

In August, Policing Minister Damian Green warned that fans who smuggled flares and smoke bombs into games were putting the lives of other supporters at risk.

The government's warning over the devices said they could burn as hot as 1,600 degrees Celsius for as long as an hour.

In February, a 14-year-old boy was killed by a flare thrown by supporters during a South American Libertadores Cup match in Oruro, Bolivia.