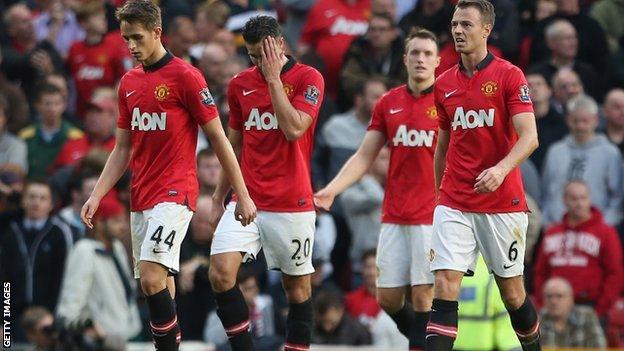 The Gunners are top of the table, eight points clear of the reigning champions, who have endured their worst league start in 24 years and lie eighth in the standings.

"Are Man United out of the title race? No, but of course 10 points starts to be a little gap," said Wenger.

"They have big players, big experience and they are a big club."

A late goal from Southampton's Adam Lallana denied United victory at Old Trafford on Saturday, with the south-coast club sitting sixth and holding a four-point advantage over David Moyes's side.

"Like it or not, this is a season in transition and it's the biggest transition any club in our era has ever known and ever will know.

"With the manager and the chief executive going, the whole club is different and other clubs will be going there thinking we'll never have a better chance."

In contrast, Arsenal's resounding 4-1 win over Norwich at the Emirates maintained their two-point advantage at the top of the league and extended their unbeaten run since their opening day defeat to Aston Villa.

"If you have the choice, you want to be in the race at the top, but you cannot rule Man United out today," added Wenger. "It is too early."

The Frenchman, whose side overturned United's 12-point lead to win the title in 1998, added that eight points can be retrieved quickly.

"It is three games," said Wenger. "That is very quick in our league."

Scrutiny of United's form has been intense since Moyes became manager following the retirement of Sir Alex Ferguson.

Since a 4-1 opening day win at Swansea, his side have only beaten the league's bottom two sides and have suffered defeats by Liverpool, Manchester City and West Brom.

The run leaves them seven points worse off than at the same stage last season, when they eventually won the title by 11 points.

BBC pundit Alan Hansen says the poor run of form is in danger of ending their hopes this term.

"In terms of the title, they are certainly on the verge of losing it as a consequence of their unconvincing start to the season," Hansen wrote in his Daily Telegraph column.

"United were truly awful at times in the early weeks and months of last season, but the difference between then and now was that they dragged themselves to victories with the late surges that are missing now.

"Maybe that is down to the 'Fergie factor', but it is more likely down to the inevitability that, sooner or later, the tide begins to turn."

Former Everton manager Moyes has already admitted filling the void left by Ferguson after his 27 years and 38 trophies at Old Trafford will be difficult.

"As a player who played at Old Trafford for Coventry and Villa, you sometimes lose the game before you get off the coach because you're in such awe of the stadium and players you are going to play against - and managers can be the same," said Dublin.

"Ferguson's not there anymore, so players are thinking 'hold on, we've got a chance here'."