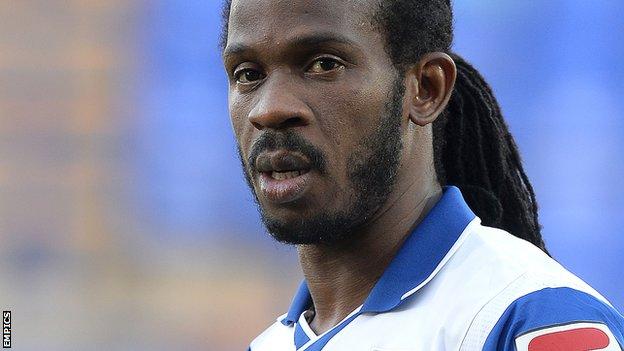 The 40-year-old centre-back was dismissed following a clash with Orient striker Kevin Lisbie and will be suspended for the next three matches.

"Referees aren't stupid and they're going to look for it. You can't stand up and slap someone in the face," Moore told BBC Radio Merseyside.

Rovers slipped into the relegation zone after a fourth home loss this term.

"The way we collapsed was embarrassing," continued Moore. "There was nothing in the game in the first half.

"We were a bit unlucky to be 2-0 down, and then 'Goody' does something stupid that's let everybody down."

The veteran Jamaican, who is the oldest outfield player in the Football League and for Tranmere, escaped a sending-off in his side's previous league encounter - an

Goodison looked to have caught Kyel Reid with an elbow in front of the dug-out, but referee Darren Drysdale issued a caution rather than a red card.

Moore said Lisbie's tackle on Goodison on Saturday, which led to Goodison's dismissal, was a poor challenge but added that it did not excuse his own player from reacting.

"They've had a little get-together, but you can't do what he's done," said Moore.

"It's been on the cards for a couple of weeks because he got away with it at Bradford, where I thought he shouldn't have been sent off, but he was involved."