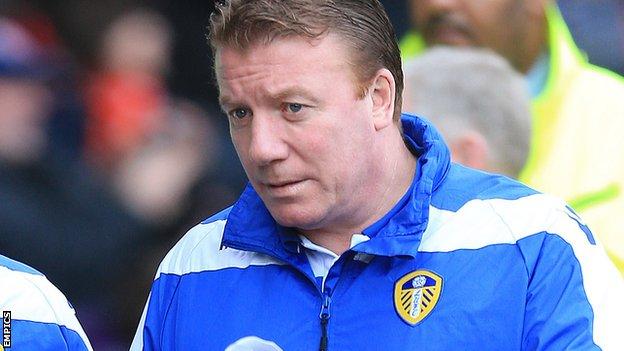 Caretaker boss Ronnie Jepson says he will give his best for Bury, however long he remains at the League Two club.

Jepson took charge of following the

When asked by BBC Radio Manchester if he wanted the job on a permanent basis, Jepson responded: "I don't want to put anybody under pressure.

"I'll just do my best for Bury. If I'm here for two years or two weeks, we'll shake hands and I'll go as friends."

The 50-year-old continued: "If the chairman wants to give it to whoever, I'll respect his decision. Whilst I'm here I'll give the chairman, the supporters and the players 110%."

How we didn't get something out of the game, I'll never know

Jepson's only previous managerial role was a 22-month spell at Gillingham between 2005 and 2007.

A former Bury striker, he as assistant to Blackwell, who was dismissed on 14 October following a run of seven games without a win.

Jepson's first game in temporary control was the defeat at Fratton Park.

"How we didn't get something out of the game, I'll never know," he said. "We were on the front foot from the off and you saw the sigh of relief from their staff afterwards. [Portsmouth manager] Guy Whittingham was almost a bit apologetic.

"Our boys showed fantastic spirit and it's just not dropping for us at this moment in time."