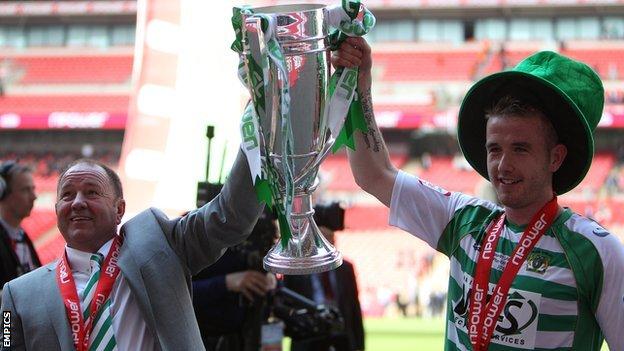 Republic of Ireland international Madden played a major part in the Glovers' promotion to the Championship last term, scoring 23 in 39 games.

But the 23-year-old has failed to find the net this season and was left out of the squad for Saturday's goalless draw with Brighton.

"If he was up to it at this moment in time then we'd play him," said Johnson.

He told BBC Somerset: "But I chose the team that was going to give us 100%. If I don't think that they can, then I won't play them."

Yeovil paid an undisclosed five-figure fee for Madden in January and his goal at Wembley helped defeat Brentford 2-1 in the League One play-off final.

When fit this season, he has played up front with Swindon loan forward Andy Williams, although he has twice been subbed at half-time.

On Saturday, Johnson opted to start with Sam Hoskins and James Hayter as their attacking line, with Williams on the bench.

"They [Hoskins and Hayter] are certainly ahead of the ones we didn't select. Only I know what goes on behind closed doors," added Johnson.

Yeovil have the worst goalscoring record in the Football League - six in 12 games.

Only one of their strikers, James Hayter, has scored this season with the other five goals coming from midfielders Ed Upson (2), Joe Ralls, Joel Grant and Liam Davies.

"The crowd are also singing about Sam Foley, and we love him, but he's another one who doesn't warrant a place just yet, for reasons that stay with the management."

Yeovil have not won a league game since the opening day of the season and Saturday's draw saw them drop to the bottom of the standings.

They have only scored six goals from their 12 league matches - the worst goalscoring record in the Football League - but also have one of the smallest budgets in the division.

"That's why we've got to sort out the wheat from the chaff. We've got to keep adding quality as and when we can."