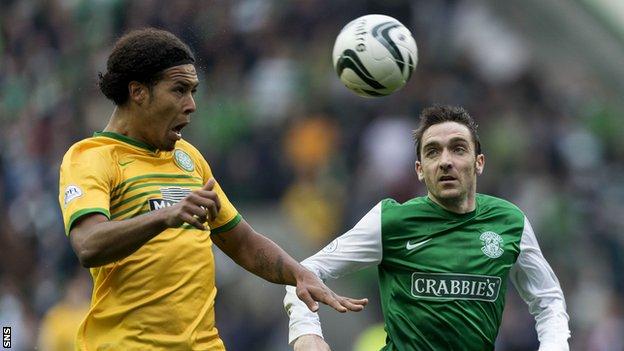 "If he is coming then it will be great, of course, but I still want to play a good game just for myself and we will see what happens," said Van Dijk.

"I just want to play my own game and not put any more pressure on myself."

I have never been invited for the first team of Holland, so I have never had to think about it

Celtic manager Neil Lennon has suggested that Van Dijk's performances since his merited a call to his country's squad ahead of next year's World Cup finals.

"It is definitely a dream to play for the national team," said the 22-year-old, who has played for Netherlands Under-21s.

"There are a lot of good players, but I have never been invited for the first team of Holland, so I have never had to think about it."

Van Dijk enjoyed Saturday's 1-1 draw with Hibernian even though it left manager Neil Lennon angry at the home side's tactics.

The Northern Irishman described some of the , but Van Dijk said: "No, I didn't think it was too physical.

"Some of the challenges definitely were tough, but we played a very good game.

"We created a lot of chances and we should have scored two or three, but we didn't lose, so that was good."