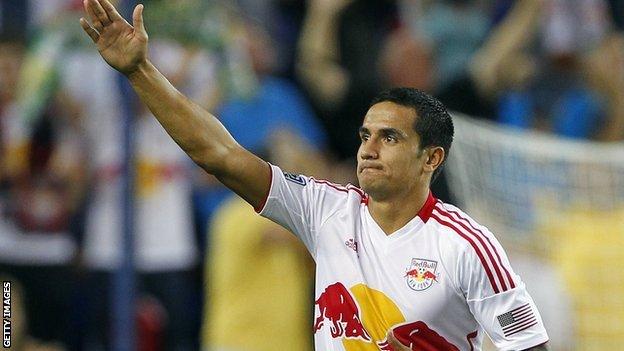 Ex-Everton midfielder Cahill, 33, arrowed in a shot from outside the area in a 3-0 win over Houston Dynamo to beat the previous record of 11 seconds set by Dwayne de Rosario in 2003.

"It was a special goal and something I won't forget," said Cahill.

The Red Bulls top the Eastern Conference with one game to play.

Now in his first full season, he is the club's top scorer with 11 goals.

A run of seven games without defeat has helped the Red Bulls reach top spot in the Eastern Conference.

They needed to finish in the top five to qualify for the MLS Cup, a knockout tournament that also includes the best five teams from the Western Conference.

Former England midfielder David Beckham was part of the Los Angeles Galaxy team which won the MLS Cup in 2012.