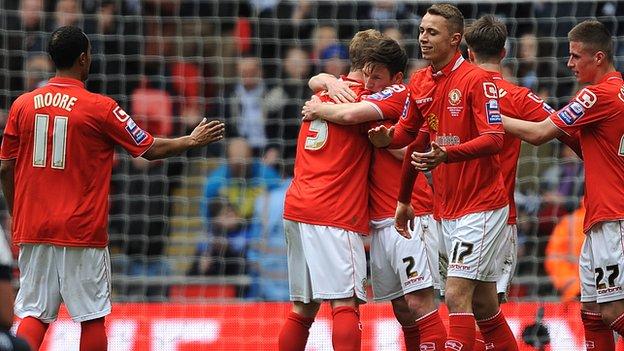 Crewe Alexandra manager Steve Davis is encouraging his young players to express themselves and be the Arsenal or Tottenham Hotspur of League One.

After a shaky start to the season, Davis's men have climbed out of the League One relegation zone with successive victories.

And what has pleased him has been the style with which the Alex have done it.

"Arsenal and Spurs play it quick in the final third. I want us to play exciting football too," he told BBC Radio Stoke.

"A lot of the attacks we had against Bristol City on Saturday that caused them problems was down to quick thinking, one and two touches around the box.

"That's the way I want us to play. You see Arsenal and Tottenham play that way.

"I want us to break quickly, think quickly and express ourselves."

While Crewe are more renowned for being a club who provide Premier League players of the future, Aston Villa midfielder Ashley Westwood being the latest off the production line, they have also benefited the other way since Davis took charge two years ago.

Last season, in their first campaign back in League One, he had the use of Arsenal youngster Chuks Aneke for the season, as well as Newcastle United's Brad Inman.

Aneke has since returned for another spell in Cheshire on loan, while it took a patient summer's negotiations to bring in Inman on a permanent deal.

And, with promising talent like Matt Tootle, Max Clayton, Ryan Colclough and the manager's own son Harry Davis on the books, the continued scores of scouts at home games testifies that there are still plenty of young players still catching the eye at Gresty Road.

"They've got to have the awareness," said the Crewe boss.

"The message to them is be expressive and try things. And the best place to do that is in and around the box.

"And, while we're not necessarily going to get to Arsenal's standards, we can do it in our way with the players we've got."