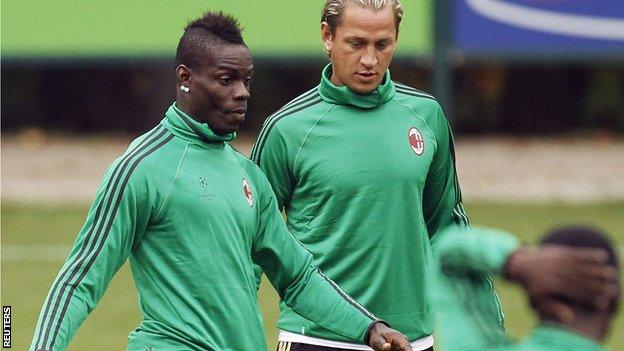 Mario Balotelli could return from injury when AC Milan host Barcelona in the Champions League on Tuesday.

The striker, who recently completed a four-match ban for intimidating a referee, missed Saturday's 1-0 win against Udinese with a thigh complaint.

"We will evaluate him after training," Milan boss Massimiliano Allegri said on Monday, ahead of the Group H match.

Tuesday's match at the San Siro will be the seventh Champions League meeting between AC Milan and Barcelona since September 2011.

The Rossoneri won 2-0 in the home leg of last season's quarter-final tie before Barca progressed with a 4-0 triumph in the return leg.

"He's definitely improving. In the afternoon we'll see if he's fit enough for selection or not."

Milan, who are eighth in Serie A after a mixed start to the new campaign, have beaten Celtic and drawn at Ajax in their opening two Champions League games.

Barcelona lead the group with maximum points after beating both the Scottish and Dutch champions.

But Gerardo Martino's side were held to a 0-0 draw at lowly Osasuna on Saturday - the first time Barca had failed to score in La Liga since January 2012.

"Milan are no worse than Osasuna," added Allegri.

Barcelona talisman Lionel Messi is pushing for a starting place after appearing as a second-half substitute against Osasuna.

The Argentina international, 26, had been out since 28 September with a thigh injury and missed Barca's victory against Celtic.

"Messi looks in good shape to me because the gamble in taking him to Pamplona was to see how he was feeling," said Martino.

"He recovered more quickly than we expected. We felt it was sensible for him to get some playing time."