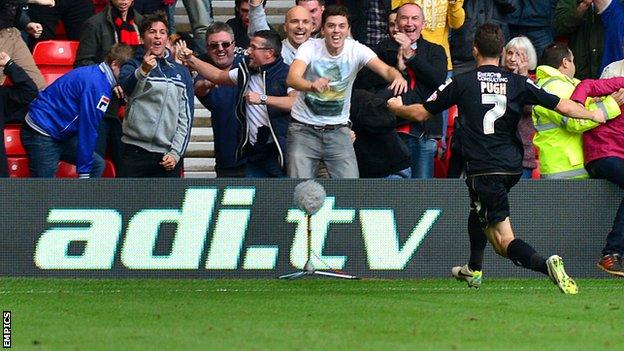 Bournemouth winger Marc Pugh has revealed derogatory comments written about the club in a Nottingham newspaper last week helped inspire them to earn a point against Forest.

Before the game, an article published by a fan in the Nottingham Post referred to the Dorset club as "inferior", "small-time" and "minnows".

I'm playing him, he is playing 90 minutes. There is a reason for that. You ask their [Nottingham Forest] defenders whether they want to play against him again - the answer is no

"We did have a look at it [the article] in the changing room in a meeting. We just wanted to come here and prove to people we are not in the league to make up the numbers and prove we can come to big clubs."

The Cherries have now picked up away points at Doncaster, Middlesbrough and Forest, as well as defeating Charlton, Wigan, Barnsley and Millwall at Dean Court.

And Pugh insists that the club should be looking up the table, rather than down.

"There is more to come," he said. "This league is full of surprises - who knows, if we keep picking up points away and win at home we won't be too far away [from the play-off places]."

Meanwhile, manager Eddie Howe says he is unconcerned that club-record signing Tokelo Rantie is yet to get on the scoresheet.

Striker Rantie, 23, has still not scored since his move from Malmo in August having now played six games.

"I'm playing him, he is playing 90 minutes," Howe said. "There is a reason for that. You ask their [Nottingham Forest] defenders whether they want to play against him again, the answer is no.

"I said it when Lewis Grabban went how many games without scoring a goal [last season]. He played every week, we were winning and scoring goals and he was pivotal to that - and TK is developing that same relationship.

"If I take him out, that is not going to help his confidence or help him acclimatise to English football."