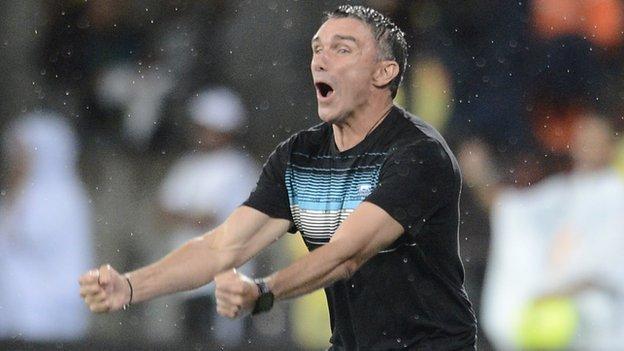 TP Mazembe coach Patrice Carteron has heaped praise on his players after they made it to the Confederation Cup final by beating Stade Malien in their two-legged semi-final.

The Democratic Republic of Congo side won 1-0 at home on Saturday, having earned a 2-1 victory in the first leg, to go through 3-1 on aggregate.

Carteron told BBC Sport: "The two games were really hard. The players played well but the most important thing for me was the spirit they showed during those games - they played with a lot of heart, a lot of generosity. They were fantastic and I am really proud of them.

"They gave 100% and they understand that to work hard is the best thing they can do.

"It was not easy to beat Stade Malien. In the second half of the first game, we played really badly. But in the second leg the team gave 100% and we qualified for the final. We are very happy."

Mazembe's build-up to the second leg was disrupted by an ugly club versus country row over Rainford Kalaba, Stopila Sunzu and Nathan Sinkala.

The three players missed the match because they are being prevented from returning to their club from Zambia after a dispute over why they did not play for their country in a friendly against Brazil in China.

With the issue still ongoing, Carteron has been left feeling upset by the events.

"I am sad for the players and for the Zambian Football Federation," he said. "The three players were fantastic at the 2012 African Cup of Nations when Zambia won the title and when I see what happened this week, I think it is terrible and I do not understand.

"The players love their country, I do not understand what the Federation wanted to do."

The trio remain in Zambia, having had their passports confiscated, but Carteron is hopeful the situation will be resolved soon.

However, even with the return of his three key players, the ex-Mali coach believes his side face a difficult task to lift the Confederations Cup.

Tunisian side CS Sfaxien stand in their way, with the sides set to meet over two legs next month.

"They are a better team than us at the moment," said Carteron. "I have watched them play and they are a good team. We will have to be fantastic during both games to win this cup.

"But we will give everything to win this trophy and will be very motivated."