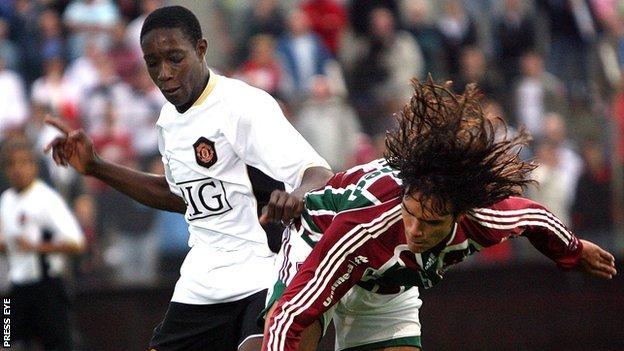 The Milk Cup youth football tournament has been dealt a blow after the Dairy Council for Northern Ireland ended its sponsorship of the annual competition.

A statement from the Dairy Council said that the decision had been taken following a "strategic review" of its activities in Northern Ireland.

The Dairy Council began sponsoring the tournament in 1983.

"This was not an easy decision for us but no sponsorship is permanent," said Dairy Council chief Mike Johnston.

The competition's traditional base over the last 30 years has been Coleraine with games also taking place in Portrush, Portstewart, Ballymoney and Limavady.

In more recent years, the finals night has taken place at the Ballymena Showgrounds while there have also been games in places such as Cloughmills and Broughshane.

The future of the Milk Cup is very secure

Despite Monday's announcement, tournament chairman Victor Leonard told BBC Sport that planning is already well underway for the 2014 competition and that it would "definitely go ahead" next summer.

"The future of the Milk Cup is very secure," added the tournament chairman.

"2014 will be a very strong event. We are at an advanced stage with teams and actually looking to enhance the event.

"The partnership with the Dairy Council has been a very exciting and very beneficial one but we already have some things going on in the background, preparing for this day."

However, there is no doubt that the loss of the main sponsor has to be regarded as a blow for the youth tournament.

"The Milk Cup has been a hugely important and successful sponsorship for the Dairy Council since we became involved 30 years ago but the market has evolved," added the Dairy Council chief executive, Mr Johnston.

"But we need to ensure that our activities meet the needs of the Northern Ireland dairy industry.

"We are delighted that over the past three decades we have played our part in making the Milk Cup one of the top events of its kind in the world.

"One of the things that attracted us to the event in the early 1980s was the opportunity it provided for local lads to have the experience of playing against teams from other countries and cultures.

"At a time when Northern Ireland was in the grip of a dark period in its history and amidst negative publicity in international media, it will always be a testament to the tournament that teams from all over the world were prepared to come to Northern Ireland."