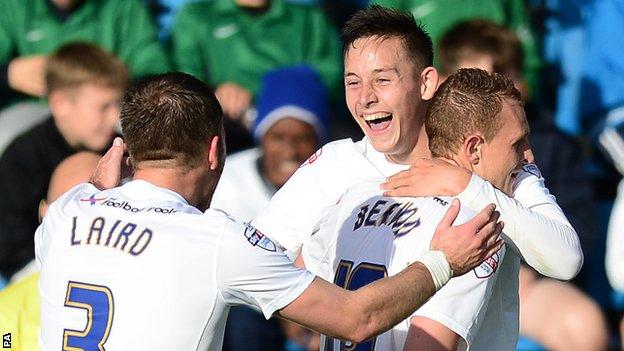 Teenager Josh Brownhill says the speed at which he has risen into Preston's first team has surprised him, after scoring on his first league start.

The 17-year-old midfielder appeared in North End's previous two matches as a substitute and scored the second in a on Saturday.

"I didn't think it would come so quickly," he told BBC Radio Lancashire.

"I thought that if I kept doing well, eventually I might get there, but it's come so quickly. I can't believe it."

The victory ended Preston's run of three straight defeats and pushed Simon Grayson's men up to fourth in League One.

I'm not frightened of playing young kids because if they're good enough, they'll play

The North End boss was full of praise for Brownhill, who spent most of his junior career with Manchester United, adding: "It was a dream debut for Josh and full credit to him because I thought he did really well in the game.

"He looked very composed with the ball, got into good areas in advanced areas and was in the right place at the right time. It's a debut he'll remember for a long time."

But Grayson admitted that even he has been caught out by Brownhill's progression into the senior ranks.

He continued: "I'll be honest - I didn't know a great deal about the lad.

"We had him with us a couple of times last year and thought he was OK, but did we seriously think he was going to be in the first team within the first four months of the season? No, but there are opportunities for any player.

"Josh is a good example for any of our academy players. If they do well and impress, they'll get an opportunity in the first team. I'm not frightened of playing young kids because if they're good enough, they'll play."