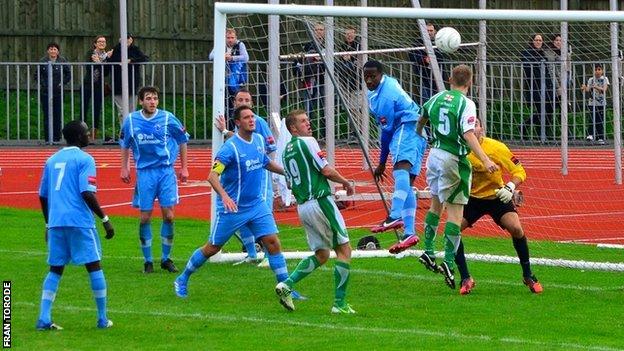 Guernsey FC boss Tony Vance said his side paid the price for failing to take their chances as the first FA Trophy game on the island ended in defeat.

The Green Lions lost 2-1 to Billericay Town to bring the club's first FA Trophy campaign to an early exit.

"Perhaps we weren't ruthless enough in first half and that probably sealed our fate. We were always playing catch-up after that."

In a match attended by British cycling legend Sir Bradley Wiggins, Ross Allen scored Guernsey's only goal of the game with a superb individual effort after Glenn Poole's penalty and Joe Benjamin's strike had put Billericay 2-0 up.

Vance added: "We knew we had goals in us and we fancied our chances as long as we could do the right things.

"But they're a strong unit, and they play a league above us and they closed the game off really well."

Billericay captain Craig Edwards admitted the weather conditions had played a significant role in the match.

"We weathered the storm first half - literally with a gale force wind blowing into our faces in the first half," he said.

"I thought we looked comfortable at 2-0 but we should have put the game out of sight in the first 15 minutes of the second half.

"We had so many opportunities, and fair play to Ross Allen - he's a talent and scored a great goal to put Guernsey back in the game.

"But I was really pleased with how we closed the game out. I don't think we gave them another opportunity after that."

Guernsey are back in action at the weekend in the Ryman South League against Worthing.