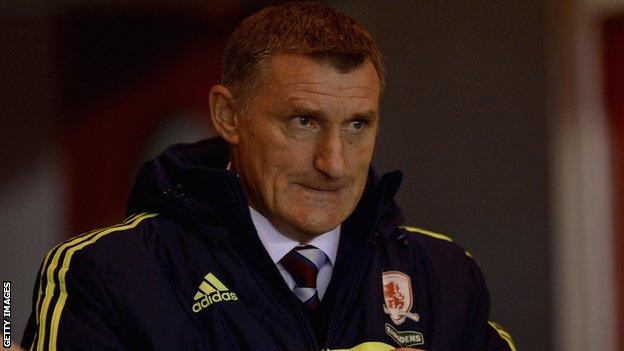 Middlesbrough manager Tony Mowbray says he can shoulder the criticism that some supporters have voiced recently.

Boro were third in the Championship at the turn of the year but have won only five of their 33 league games in 2013.

There's been both positive and negative reaction. I don't think there's a manager in the world who has total support of his club's fans

Saturday's defeat at Barnsley left them 10 points off the play-offs and some fans chanting for a change of manager.

"I can take it. As a football manager in an era of social networks and radio phone-ins you have to because everyone has an opinion," he told BBC Tees.

"You live with it every day now that there's a platform and I am absolutely fine with that."

Mowbray started his playing career with Boro in 1982 and was named captain of the side aged just 23. He skippered them back to the top flight in 1988 via consecutive promotions and in total amassed 348 league appearances in a nine-year spell.

The 49-year-old retired in 2000 and after stints managing Hibernian, West Bromwich Albion and Celtic he returned to Teeside almost exactly three years ago.

And it has been a mixed spell for the Saltburn native. In his first full season he led the club to seventh in the Championship and last term they were well placed for a promotion push before a dramatic plummet in form meant they finished in 16th place.

"You can ask whether I am losing the support of the fans but it's not about the individual, it's about whether it's felt the football club is moving in the right direction," he continued.

"And that's not just me, it's the owner of our football club and the supporters too. The players didn't capitulate against Barnsley despite being 3-0 down at half-time [the match ended 3-2] so I think they still believe in what we are doing here.

"And with the supporters, there has been both positive and negative reaction from them and I don't think there's a manager in the world who has total support of his club's fans."