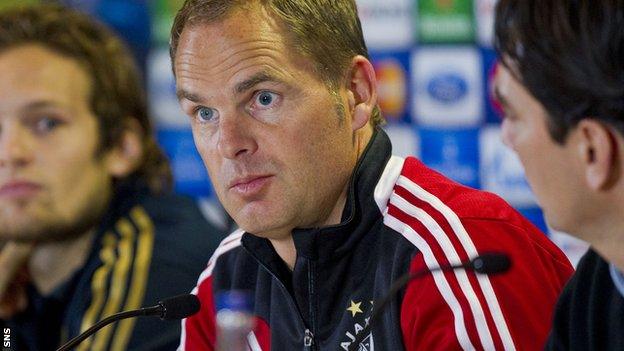 Ajax coach Frank de Boer is aiming for third time lucky when his side takes on Celtic in the Champions League.

The Dutchman was twice on the losing team at Celtic Park during his short spell as a player at Rangers in 2004.

He is now hoping he can come out on top in Glasgow as a manager, with both clubs aiming to kick-start their European campaigns.

"Things can change sometimes and hopefully now the luck is on my side," said de Boer.

"I remember the great atmosphere and the rivalry between the two clubs.

"The atmosphere is still in my mind. For me, it was a great adventure."

De Boer admitted that the intimidating surroundings at Celtic Park will play a crucial role in the match and he expects his players to savour the occasion.

"For me, the players have to enjoy the atmosphere," said De Boer.

"When you are young, you want to play in this kind of stadium and this kind of atmosphere. It has to give you more adrenalin in your body to perform better.

"If you're playing worse than your normal level, maybe you're not good enough to play at this level.

"Of course, you can be nervous but when the referee starts the game, you have to get rid of the nerves and enjoy a great stadium and a great pitch."

Celtic are currently bottom of Group H with no points, while Ajax are a single point ahead after two games played.

De Boer will assess the fitness of injury doubt Niklas Moisander at training on Monday night, and conceded that avoiding defeat in Tuesday's encounter with Celtic would be his main objective.

"A draw will maybe be enough because two weeks later we play Celtic at the Amsterdam Arena," said De Boer.

"If we win that game, maybe it would be difficult for Celtic to get third place.

"To lose this game would give Celtic a great advantage so we want to get three points at Celtic Park.

"I think Celtic are favourites for this game. The level between both clubs is even and they are playing at home with the fans behind them.

"But after the last whistle we will see if they were favourites or not."