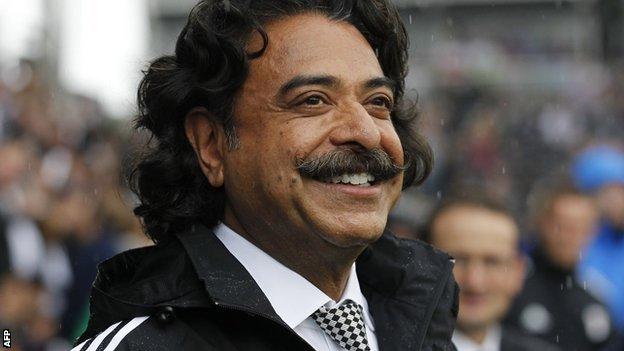 Owner Shahid Khan says he is convinced Fulham will turn their season around.

The Cottagers have endured a poor start to the campaign and manager Martin Jol was barracked by some fans during a recent five-match run without a win.

But Khan told BBC London 94.9: "We are not where anybody who is a Fulham supporter wants to be, but we've got a great team and a lot of talented players.

"They're gelling. The season is [just] starting and the best is yet to come."

Al Fayed had invested heavily, transforming Fulham from a fourth-tier side into one well established in the Premier League.

And Khan says his goal is for the club to achieve long-term sustainability.

"I think there should be a business model where we're able to invest in players of a certain level and sustain and grow for a long time," he said.

"I'd like Fulham to be sustainable. Fulham, even past my time, shouldn't be dependent on someone's generosity."

The billionaire car-parts entrepreneur, 62, is also keen to raise the Jaguars' profile and build a fan-base for them in Britain.

Khan explained: "We [Jaguars] are one of the very small city clubs. For us to get a competitive advantage we must increase our fan-base.

"We need more fans. We've got great fans in Jacksonville - very passionate - just not enough of them.

"The NFL is very powerful in the US and I think the growth opportunities overseas, in London, couldn't be more natural for us."

The Jaguars are playing San Francisco 49ers at Wembley on Sunday.