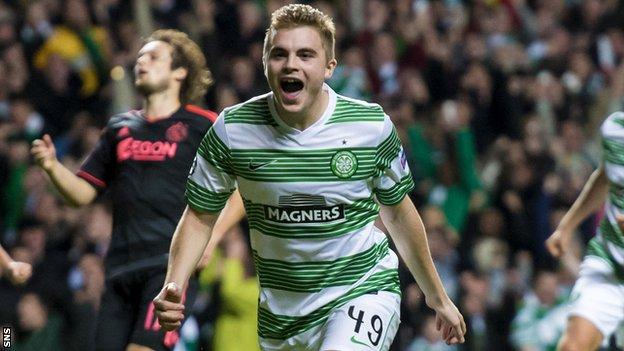 Celtic recorded a crucial and highly deserved first win of the Champions League group stage to move above Ajax.

A finely balanced first half ended with James Forrest showing great composure to score from the penalty spot.

Beram Kayal got what proved to be the winner with a deflected shot in a second half controlled by the hosts.

There was a late wobble from Neil Lennon's side after substitute Nir Biton was sent off and Lasse Schone fired in an injury-time goal.

But Schone's impressive drive was virtually the last kick of the ball and Celtic got the victory that keeps them well in contention for a place in the last 16 for a second successive season.

They now head to Amsterdam in a fortnight's time in third place and surely full of confidence they can take something from that game, especially having won this one without the influential trio of Scott Brown, Kris Commons and Adam Matthews.

Perhaps the match's pivotal moment came in the closing moments of the first half.

Anthony Stokes, a hitherto unseen presence on the night, was brought crashing to the deck by a clumsy Stefano Denswil challenge, giving the referee an easy decision.

If that was the ideal way to end the half, there was an early and decisive breakthrough in the second period.

Georgios Samaras's ball into the box from the left was cleared as far as Kayal, whose placed effort from 20 yards deflected off the unfortunate Denswil to beat Cillessen.

Ajax may have wondered at that stage quite how they found themselves two goals down and yet had they been more clinical either just before or just after that Kayal goal, their predicament would not have been as dire.

Thulani Serero and Kolbeinn Sigthorsson carved out a glorious chance only for Serero to shoot tamely at Fraser Forster.

And Sigthorsson himself should have done better than to shoot narrowly wide with only the keeper to beat.

When they did eventually get past Forster, it was with just seconds remaining - Schone's powerful swerving effort from just outside the box a fine effort nonetheless.

In truth, Ajax might have found themselves in front long before Forrest's strike, as Christian Poulsen volleyed against the post from a Viktor Fischer free-kick.

But Celtic had also been wasteful in the early stages, with Teemu Pukki failing to connect with a perfect Mikael Lustig cross, which was begging to be converted.

Other than the late goal, Forster's only other tests in the second half came from distance, with Schone having another effort pushed away and Daley Blind also going close.

But given the way they controlled the second half, anything other than a Celtic win would have felt unjust, though there was nothing unjust about Biton's red card - Celtic's second in two Champions League games following Scott Brown's dismissal against Barcelona - as the Israeli slid in dangerously on Serero.

The game was also marred somewhat by crowd trouble among the visiting support following Celtic's opening goal, but nothing could take away from another fine Champions League achievement by Celtic.