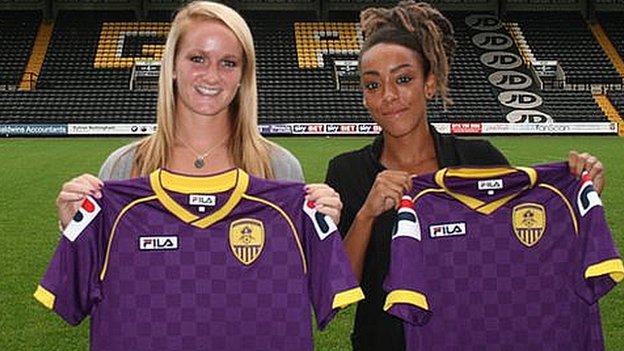 England internationals Sophie Bradley and Jess Clarke are the first Lincoln players to re-commit to the club since the controversial move to become Notts County Ladies.

Winger Clarke and defender Bradley, both 24, have signed two-year deals.

The Lady Imps finished sixth in the Women's Super League last term and will complete the switch to Meadow Lane next season.

"It is definitely a special moment for me," Bradley told BBC Radio Nottingham.

"It has been 11 or 12 years since I've not had to travel to play football, so to actually be here in Nottingham playing at Notts County is exciting."

Clarke said the new deal, while for a new club in name and location, still feels like committing to the same side she first joined in 2010.

"The main core is still Lincoln, but obviously moving to Notts County will give it more of a push with the fan base," Clarke said.

"Moving forward the club is very ambitious. Hopefully next season we can go a bit further."