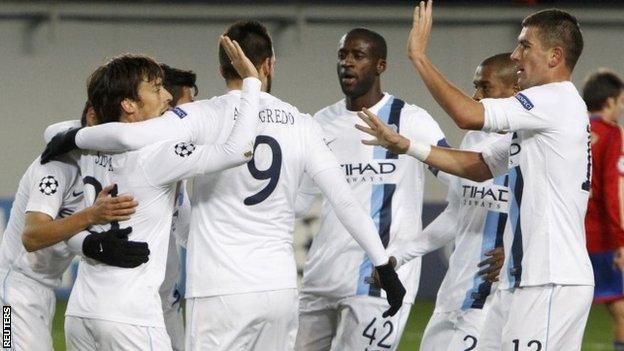 Manuel Pellegrini had complained about the pitch at the Khimki Arena, and the City boss must have feared the worst when Zoran Tosic put the hosts ahead.

It was far from comfortable for Pellegrini and his players, who were forced to endure some anxious moments against the Russian champions to record their second away win of the group stage.

Indeed City goalkeeper Hart had to produce a fine stop with an outstretched leg to deny Japan international Keisuke Honda an equaliser deep into stoppage time.

But victory over CSKA in the return game at the Etihad Stadium on 5 November ought to allow City to start planning for the knockout stages for the first time.

After their flat performance against Bayern Munich three weeks ago, City now have six points from three games, three more than the Russians.

CSKA painted the pitch green in some areas after Pellegrini said it was "unbelievable" Uefa passed it fit for use following heavy rain.

But the Chilean's pre-match criticism of the surface was quickly brushed aside as City peppered the hosts' goal.

Aguero, Yaya Toure, who said after the game he had been subjected to racist chanting, and Negredo all had chances before poor defending in the 32nd minute allowed Tosic to produce a moment of quality that was all too rare during his stint at Old Trafford between January 2009 and June 2010.

The 26-year-old Serbia international found the net with a delicate lob after Honda won an aerial duel with Javi Garcia.

Yet the character lacking from Pellegrini's side in the 3-1 home defeat by Bayern last month was in ample supply as Aguero spearheaded the turnaround.

Within two minutes the visitors were level, the Argentina forward getting ahead of marker Sergei Ignashevich to turn Silva's low cross home from close range.

And three minutes before the interval, Aguero put City in front with his ninth goal of the season, a brave header following a delightful cross from the outside of Negredo's boot.

CSKA pushed forward in search of an equaliser after half-time, Tosic proving a serious threat as City lived dangerously.

Substitute Ahmed Musa thought he had equalised in the 80th minute with a terrific 20-yard strike but his effort was ruled out as Pontus Wernbloom fouled Toure.

"I'm very happy. The result is very important for the team. The whole team concentrated with intensity on a difficult pitch.

"Aguero and Silva are both top players and every match they show how they can play football. We are not in the next round but this is very important for us."