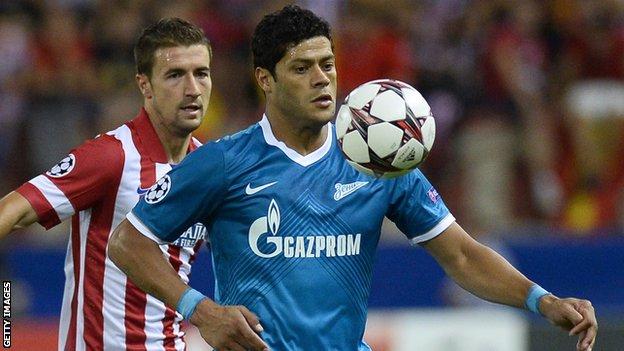 Zenit St Petersburg striker Hulk has promised not to celebrate if he scores in his first return to old club Porto.

The Brazil international is expected to start for the Russian side in Tuesday's Champions League trip.

A statue of the 27-year-old stands in Porto's museum after he helped them win domestic and European honours before joining Zenit in a £32m move last year.

"I want to keep scoring, but if I do, I will not celebrate out of respect for Porto," he said.

He has scored nine goals in 12 matches for Zenit this season, including two goals in the Champions League.

Hulk spent over four seasons with Porto after signing from Japanese club Tokyo Verdy in 2008.

"Hulk has a beautiful past in Porto. He will be welcomed at this home, although tomorrow he is our opponent," said Porto coach Paulo Fonseca.

The statue at Porto's Dragao Stadium depicts the player posing in his trademark celebration, flexing his muscles similarly to the comic book superhero he is nicknamed after.

"I've still only seen the statue in a photo, but I thanked them for the homage. I hope to have the chance to see it and take a picture next to it," he said.