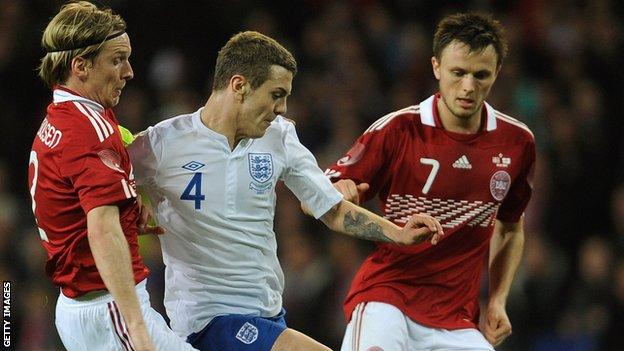 England will play Denmark in a Wembley friendly on 5 March 2014 in the build-up to the World Cup.

The fixture has been arranged as part of the agreement which saw the teams meet in Copenhagen in February 2011.

England will also face Chile and Germany in Wembley friendlies in November as part of their preparations for next summer's World Cup in Brazil.

The last time the teams met competitively was in the 2002 World Cup. Goals from Thomas Sorensen (og), Emile Heskey and Michael Owen helped England to a 3-0 win in the last 16 match between the sides in Niigata.

Denmark did not qualify for November's World Cup play-offs despite finishing second to Italy in Group B.

Morten Olsen's side missed out on a berth as they finished with the weakest record of the nine group runners-up.

England beat Denmark 2-1 in the 2011 friendly in the Parken Stadium thanks to goals from Ashley Young and Darren Bent.

Both Germany and Chile have also qualified for next summer's tournament.