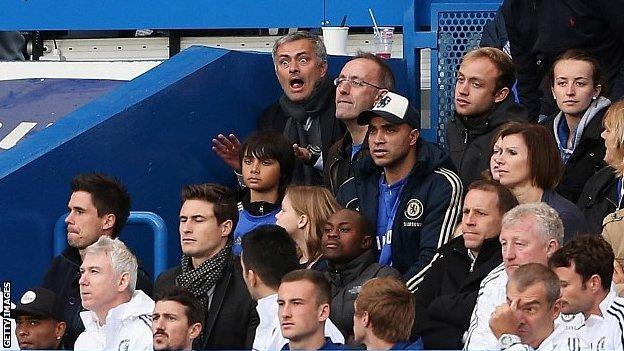 Chelsea manager Jose Mourinho has been fined £8,000 by the Football Association for "improper conduct" during his side's Premier League match against Cardiff on Saturday.

Mourinho, 50, was ordered from the technical area by referee Anthony Taylor after protesting about apparent time-wasting during the 4-1 win.

He did not appeal and can be in the Stamford Bridge dugout on Sunday.

"I accept the fine and against Manchester City I can work," he said.

"What the referee wrote is true. I wasn't aggressive, I wasn't offensive, I just had a disagreement."

Mourinho had until 18:00 BST on Thursday to contest the charge, but indicated after Chelsea's impressive 3-0 away win against Schalke in the Champions League on Tuesday that he would accept his punishment.

"[Referee Taylor] is honest and fair [in the report]," added the Chelsea boss.

"What he writes is exactly what happened and exactly why I didn't understand why I went to the stands. And it's exactly why the punishment is just a fine."

Mourinho was last ordered to the stands in May when he was Real Madrid manager.

He protested after a decision went against his team in the Copa del Rey final defeat by city rivals Atletico.