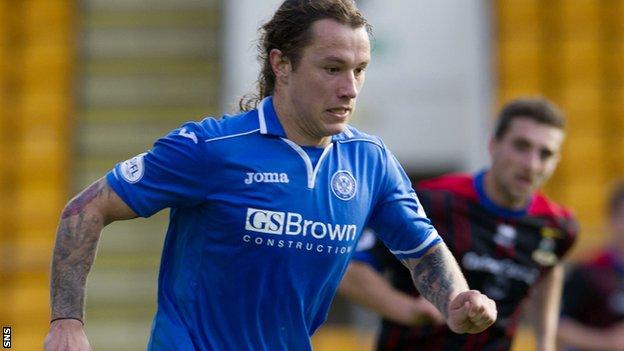 When you cast your eye over the current Scottish Premiership placings, nearly three months into the season, which team looks most out of place?

For whom does the league table, at the moment, tell the biggest lie?

I reckon St Johnstone are in a false position, languishing in the bottom six, and I stick by my pre-season forecast that the Perth team will again be battling for a European place at the end of the campaign.

They did themselves proud in this season's Europa League qualifiers, knocking out Norwegian league leaders Rosenborg and losing to the Belarussians of FC Minsk only after a painful penalty shootout.

Maybe Saints have paid the price for that early start in mid-July but I don't reckon they'll hang about too long in mid-table.

St Johnstone's removal of Inverness from their early-season perch at the top of the Premiership is one of the best team performances I've seen since the summer.

Their football at McDiarmid Park that day was quick and slick and their opponents, who had been in top form themselves, were simply blown away.

The clever link-up play between Steven Maclean and Stevie May has rightly grabbed the headlines, not to mention the goals they've scored between them.

But they're far from a two-man team; David Wotherspoon and Chris Millar are creative in midfield and surely Murray Davidson will make his presence felt before the season's much older.

Defensively, Saints have had a couple of aberrations; they've twice shipped four goals, at Tannadice and in Paisley.

That surprised me because they're normally well-organised at the back and regaining that stability will be a top priority.

Players like Dave Mackay and Frazer Wright give them strength and experience in defence, and, in Alan Mannus, they have one of the best goalkeepers in Scotland.

In Tommy Wright, they appear to have a top manager in the making; not that he's a new kid on the block, but the former Northern Ireland international goalkeeper seems an ideal fit for the Perth job.

He's a good communicator and I get the impression the St Johnstone players have readily bought into Wright's football philosophy.

He was realistic enough to know his dream start in the job was exactly that - a start - and there would be testing times to follow.

That's exactly what's happened. But I'm backing big Tommy to get it right as the season goes on and put the Perth team back up at the top end of those Premiership placings.