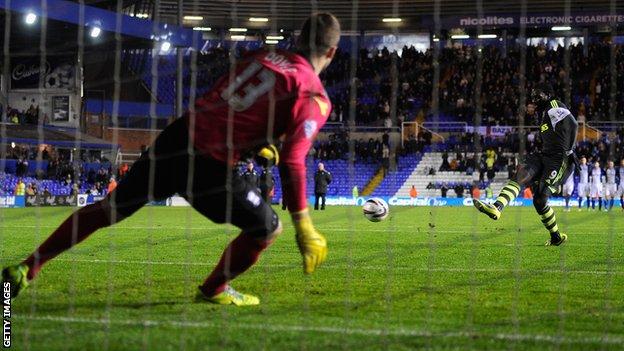 Stoke City survived a fight-back by Birmingham City to claim a penalty shoot-out win in the Capital One Cup.

Strikes from Peter Crouch and Marko Arnautovic put Stoke in command only for a late Peter Lovenkrands double to force extra time.

Kenwyne Jones gave Stoke the lead but Olly Lee took the game to penalties, where the Potters came out on top 4-2.

Steven N'Zonzi netted the winning spot-kick as Stoke reached the last eight of the competition, keeping alive their hopes of lifting the League Cup for the first time since 1972.

The result was perhaps a little cruel on Birmingham, who had twice shown great resolve to come from behind, despite having played much of the game with 10 men.

There was little to suggest that such a thrilling finale was on the cards as Stoke had the better of the opening period, taking the lead through a fine strike by Assaidi.

The on-loan Liverpool winger ran on to Marc Muniesa's smart back-heel to rifle a 30-yard strike into the back of the net via the underside of the crossbar.

A breakaway attack brought Birmingham level when Lee Novak flicked the ball into the path of Adeyemi, who confidently slotted the ball beyond Thomas Sorensen.

But as quickly as that goal raised the home fans hopes, they were subsequently dashed when Elliott was sent off just before half-time as he was judged to have raised his elbow on Assaidi.

Stoke looked to have taken full advantage as Crouch placed a header beyond Birmingham keeper Colin Doyle, before Arnautovic fired in from N'Zonzi's pass to put the visitors 3-1 ahead.

With nothing to lose, Birmingham manager Lee Clark introduced Lovenkrands and Lee.

It proved to be an inspired change as Lovenkrands scored twice in the final five minutes.

First, the Dane stabbed in from close range before snatching a dramatic equaliser in stoppage time, poking home after Demarai Gray's effort was parried by Sorensen.

Stoke substitute Jones regained the lead for Stoke early in extra time, rounding Doyle after being picked out by Stephen Ireland, but Lee's strike from distance - his first goal for Birmingham - took the game to penalties.

That proved to be a step too far for the home side. They missed their first two spot-kicks while Stoke scored all of theirs to progress to the quarter-finals.

"It was a close game in the first half, we went down to 10 men and it becomes even harder.

"But the players showed tremendous spirit to take the game to where we took it. At penalties it becomes a lottery and unfortunately a couple of my lads missed penalties. But no matter what happened in the penalties, they had done me and the supporters proud.

"I think the fans are proud of their team tonight. As long as the players and fans stick together, we will have a good chance of progressing."

"I will keep on harking back, but it shouldn't have even got to that point. We will take the prize that was on offer, which is a spot in the last eight of the Capital One Cup and move on.

"We will hopefully keep on progressing in the competition but there are a lot of things that we need to learn from tonight.

"I am obviously pleased to have got through, but we need to be better in similar circumstances in the future, that is for sure."