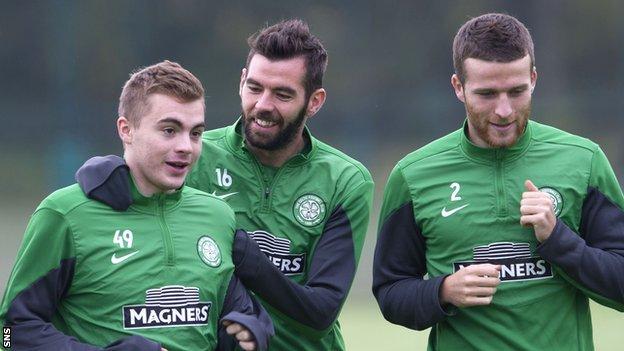 Former Celtic midfielder Peter Grant believes the Scottish champions have to beat Ajax on Tuesday if they are to have a realistic hope of reaching the Champions League knock-out stages.

Manager Neil Lennon, however, believes a draw in Glasgow would still give them a chance of progression as he feels Celtic can win in Amsterdam.

"I think it's a must-win game and I think Celtic will win," said Grant.

"When you see the games coming up it would gives them a great boost."

Speaking to BBC Radio Scotland, Grant, who played for Celtic from 1982 until 1997 and who later served as the club's assistant manager, added: "There's nothing worse than having played three games and you still haven't won one.

"I think they have a fantastic chance to do it. Ajax are a very good side but they are very inexperienced.

I know what the Celtic fans are like knowing it's a game, I believe, that they need to win.

Celtic are at the foot of Group H, without a point from their away match against AC Milan and their Parkhead defeat by Barcelona.

Ajax are in third place in the group with one point ahead of the double-header against Lennon's side.

Grant is aware that Celtic are missing team captain Scott Brown through suspension and Kris Commons with injury, while defender Mikael Lustig faces a fitness test and Wales midfielder Joe Ledley is short of match sharpness.

However, he thinks the strength of the squad and the passion of the fans can produce three points for the home side.

"I still think they have the quality," said Grant, 48.

"I think Ledley has been a big player for them. I know he only played 20 minutes at the weekend but his quality always tells.

"Celtic Park always gives you a lift, with the fans behind you and playing on the big occasion always brings the best out in the players. They don't feel the tiredness. You want to play in all these big games.

"Ajax won't surprise you with the way they play. They will try to keep the ball.

"They have some wonderful players - Kolbeinn Sigthorsson, the striker, and Siem de Jong are very good - but they are very inexperienced; they are a very young side and they won't have played in an atmosphere like Celtic Park on a European night.

"I know what the Celtic fans are like knowing it's a game, I believe, that they need to win."