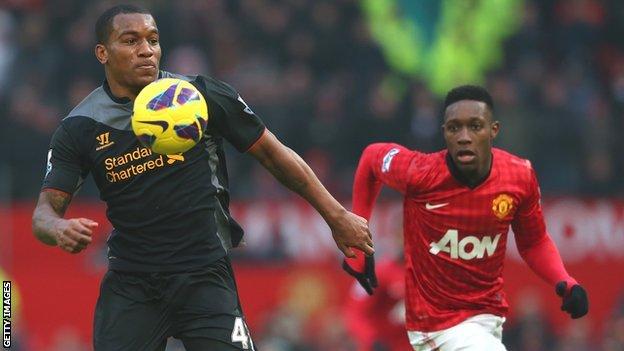 Derby County have completed the loan signing of Liverpool and England Under-21 international defender Andre Wisdom.

Wisdom has moved to Pride Park on a youth loan and agreed a deal until the end of the season.

The 20-year-old made 19 appearances for the Reds last season, but has only featured three times this term.

"Liverpool obviously think a lot of him but he's at the stage where he needs to play first-team games," Rams manager Steve McClaren told the club website.

"We're delighted they see Derby as the place to do that. We've had a few injuries in defence of late and Andre will bring extra qualities as well as more competition for places, which is always welcome."

Wisdom, who scored on his Liverpool debut against Young Boys in the Europa League in September last year, signed a long-term contract with the Anfield club in January.

He tweeted on Monday that he "can't wait to start at Derby".

Wisdom can play at right-back or the centre of defence and is the second player in less than a week to arrive at Pride Park on loan after Tottenham forward Simon Dawkins joined on a three-month deal.