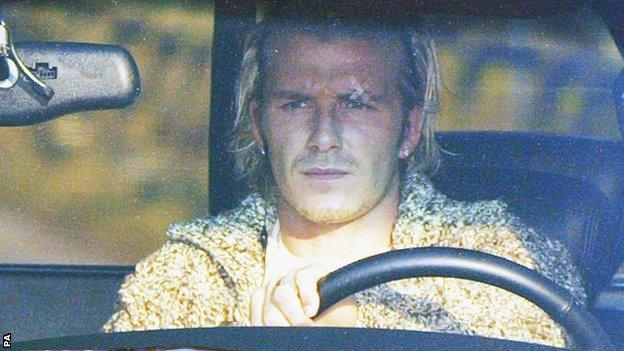 Sir Alex Ferguson says David Beckham had to leave Manchester United because the former England captain thought he was "bigger than the manager".

In his latest autobiography, Ferguson said he fell out with Beckham after criticising his performance during an FA Cup defeat by Arsenal in 2003.

"That was the death knell for him."

Ferguson also said he had concerns about Beckham's celebrity lifestyle, following the player's marriage to Victoria Adams, a member of the pop group the Spice Girls.

"David was the only player I managed who chose to be famous, who made it his mission to be known outside the game," wrote Ferguson. "I felt uncomfortable with the celebrity aspect of his life."

In a press conference on Tuesday to launch his book, Ferguson added: "He fell in love with Victoria - that changed everything."

But he also praised Beckham for his contribution to United's success and called him an "icon to every kid in the world".

For Moyes and United, even though Ferguson will not have intended this, the book provides an unwelcome, scene-stealing sideshow at a time when the new manager is attempting to create his own footprint on Old Trafford

Beckham, who won six Premier League titles, two FA Cups and one Champions League crown during his United career, was eventually sold to Real Madrid for £25m in the summer of 2003, before moving to the United States to play for LA Galaxy.

As for Ferguson, he brought his career as United boss to a close in May, ending one of the most successful managerial reigns in British history.

During his 26 years in charge at Old Trafford, he won 38 trophies and managed some of the biggest names in football, like Beckham, Eric Cantona, Cristiano Ronaldo, Peter Schmeichel, Bryan Robson, Roy Keane, Jaap Stam and Ruud Van Nistelrooy.

Ferguson also writes in 'Alex Ferguson: My Autobiography' that:

Ferguson also describes in detail his version of the dressing-room bust-up with Beckham that followed the FA Cup loss to Arsenal.

"He was around 12 feet from me," wrote Ferguson. "David swore. I moved towards him and, as I approached, I kicked a boot. It hit him right above the eye.

"Of course, he rose to have a go at me and the players stopped him. 'Sit down,' I said. 'You've let your team down. You can argue as much as you like.'

"I called him in the next day to go through the video and he still would not accept his mistake.

"The next day the story was in the press. It was in those days that I told the board David had to go."

After helping Real Madrid win La Liga, Beckham moved to the United States in 2007, guiding LA Galaxy to victory in the MLS Cup.

The hardest part of Roy's body is his tongue.

"I imagine he also had his eyes on Hollywood and the impact it would have on the next phase of his career," Ferguson added. "There was no footballing reason to go to America."

Keane was another player who Ferguson decided was no longer wanted at Old Trafford.

The Scot describes how his relationship deteriorated with the Republic of Ireland midfielder, to the point that he became a negative influence.

"With Roy, there were episodes of great friction and drama as he tried to impose his will on the team," wrote Ferguson.

"On one occasion, as I came in to the dressing room, Roy and Ruud van Nistelrooy were at it, hammer and tongs. They had to be pulled apart by the players."

Keane left United in November 2005, just a few weeks after angering Ferguson for criticising team-mates in an interview for MUTV.

Ferguson also allowed Ronaldo to leave Old Trafford in 2009, but only after Real Madrid had agreed to pay £80m for the winger.

"Cristiano was the most gifted player I managed," wrote Ferguson. "He surpassed all the other great ones I coached at United - and I had many."

Cristiano was the most gifted player I managed

Ronaldo had wanted to move to Real Madrid the previous summer, but Ferguson blocked a potential transfer because he was unhappy with the way Real president Ramon Calderon had behaved.

Ferguson told Ronaldo he would rather "shoot" him than sell him to Real, claiming he would lose his "honour" if he agreed to a sale.

However, the Scot promised to let the player leave the following year, which he did when Madrid made a world record bid.

Ferguson, whose trophy haul at United includes 13 league titles, two Champions League crowns, five FA Cups and four League Cups, decided to quit as manager in May and was replaced by David Moyes.

Under Moyes, who left Everton to take the Old Trafford job, the defending Premier League champions have made their worst league start in 24 years and lie eighth in the table, eight points adrift of leaders Arsenal.