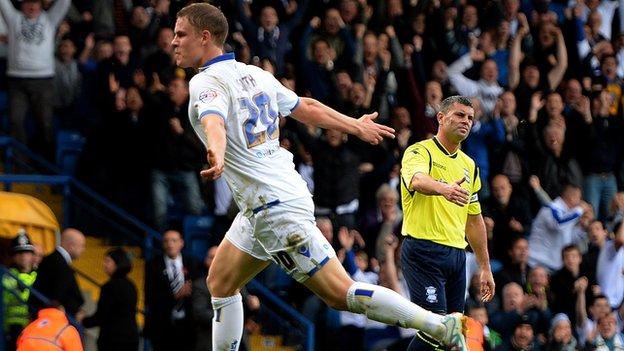 Birmingham City skipper Paul Robinson says that they have to take collective responsibility for Sunday's 4-0 hammering at Leeds United.

But Robinson told BBC WM: "You've just got to be honest, admit the truth and move on from it.

"We have to learn from this, pick each other up, get behind each other up and go again at Derby on Saturday."

Centre-half Dan Burn, playing as part of a three-man backline, was singled out for press criticism, being withdrawn at half-time, by which time Blues trailed 3-0.

Birmingham's defence had failed to get to grips with 6ft 6in Birmingham-born former Redditch and Solihull Moors striker Matt Smith, who scored two of Leeds' goals.

"It's not just Dan," insists Robinson. "We have to take everything on the chin as a team. We need to put things right.

"We all make mistakes. I have to raise my performance too.

"The first half was a shambles. They ran us ragged and it was tough for us to take.

"We didn't perform in the first half, so we changed it and we looked a lot more solid after the break.

"But really it just wasn't good enough from us from start to finish."