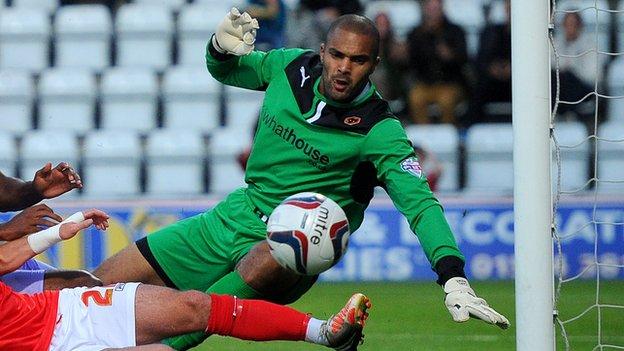 Wolves keeper Carl Ikeme believes the club's new stability is the key to them having League One's meanest defence.

The Black Country club, relegated in the past two seasons, have let in a miserly seven goals in 12 league games this term and lie third in the table, just three points off top spot.

"It's nice to go into games knowing what the players in front of you are going to do. It gives me less to do."

Ever-present Ikeme has achieved six clean sheets so far, and has only been beaten once in their last five matches, form which has been crucial to putting them on the heels of leaders Leyton Orient and Peterborough United, with a game in hand.

Wait until the second half...

"Some of the last-ditch tackles the lads have been putting in have been brilliant," added the 27-year-old youth team product, now enjoying only his second season as Wolves number one, after almost a decade waiting in the wings for his chance.

Over the last month, head coach Kenny Jackett has been able to select a regular back four of Matt Doherty, Danny Batth, Sam Ricketts, who began the season at full-back following his summer move from Bolton, and Scott Golbourne.

And, although Doherty will miss this Saturday's trip to Valley Parade to face Bristol City after coming off with a first-half hamstring injury in Tuesday night's 2-0 win over Oldham Athletic, skipper Ricketts is happy at the overall picture at Molineux.

"We're well on course for what we think we're going to need," the Wales international defender said.

"Peterborough know this league very well. They get promoted to the Championship then, due to lack of resources they come back down again, then they bounce back straight away.

"Orient have been building from last season, but our points total is fantastic for a side with such a big turnaround - above reasonable expectations."