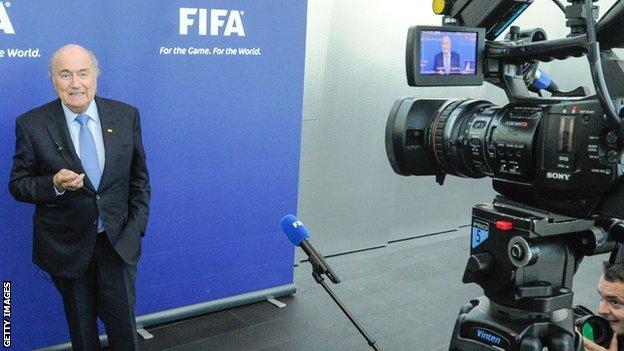 Webb had been linked with the role in 2015, with Blatter suggesting at a conference in the Caribbean on Monday that he could be replaced by Webb "in the near future".

But Cayman Islands native Webb said: "No, definitely not. That is not my intention or my objectives at this time."

Blatter, who has led Fifa since 1998, was speaking off the cuff before a speech to mark the opening of a Concacaf sport summit. The Swiss was introduced incorrectly to an audience of regional political leaders and confederation delegates as "Fifa's vice-president" by a local media officer.

Blatter, 77, stepped up to the lectern and replied to the mistake by telling the media officer and assembled guests: "I think you're a prophet."

He then added that there may be a new Fifa president in "the near future" and the next president "could be Jeffrey Webb".

After receiving applause, he added: "This would not mean I would be vice-president. Once you have been a horse you don't go back to the stable."

Sources close to Fifa have told BBC Sport that the comments should not be taken as a decision by Blatter that he will not stand as a candidate in the next election, scheduled for May 2015, and that all options are still open to him.

Blatter told Uefa delegates in 2011 that this would be his final term of office but has this year given strong indications that he may seek a fresh mandate.

The comments are the clearest indication so far that Uefa president Michel Platini - considered by many observers to be his most likely successor - is not the man Blatter wishes to see in power after he has left the role.

Platini has yet to decide if he will stand in the 2015 election saying recently that he wanted more time to consider the matter.

Webb, 49, was elected president of Concacaf in May 2012 following the acrimonious departures of former president Jack Warner and general secretary Chuck Blazer.

Now one of seven Fifa vice-presidents, Webb started his time in football governance as president of the Cayman Islands Football Association in 1991.