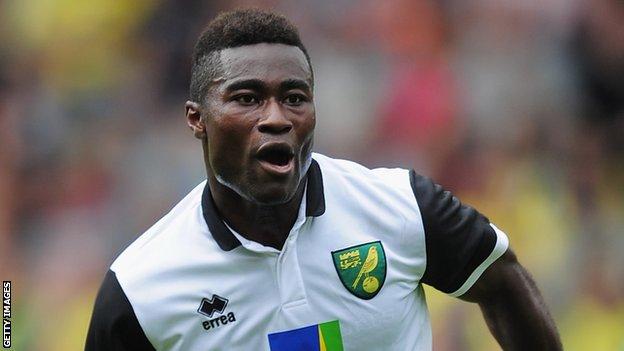 Norwich City midfielder Alex Tettey has said Saturday's visit of Cardiff is a vital fixture in their Premier League campaign after back-to-back defeats.

The Canaries have suffered losses in four of their last five games - most recently to Chelsea and Arsenal.

And Cardiff could make it three consecutive defeats at Carrow Road for Chris Hughton's side.

"It's huge. We have had two home games where we have lost," the Norway international told BBC Radio Norfolk.

"At home is where we do our business and we haven't done that in the last few games. Hopefully we can get the crowd behind us and get the three points against Cardiff."

Malky Mackay's side are one place and one point above Norwich, who remain in the relegation zone after

That result followed a similarly promising, but ultimately fruitless outing against Chelsea two weeks earlier, which the Blues won 3-1.

"We have played well. We haven't got any results from those two but we have to take the performance and channel it into three points against Cardiff," said Tettey.

"You have those periods where you play well and it doesn't pay off.

"We should keep our heads up and continue to work and believe in ourselves."

The 27-year-old has played as part of a central midfield trio alongside Johnny Howson and Leroy Fer in the Canaries' last three games.

But the Ghana-born player expects Hughton to sacrifice a midfielder to play strikers Ricky van Wolfswinkel and Gary Hooper together in the future.

"We cannot play like this in every game. We have strikers and the gaffer will want to play two upfront," he said.

"We have four good strikers. You don't buy two strikers for millions of pounds and not use them. So we'll see."