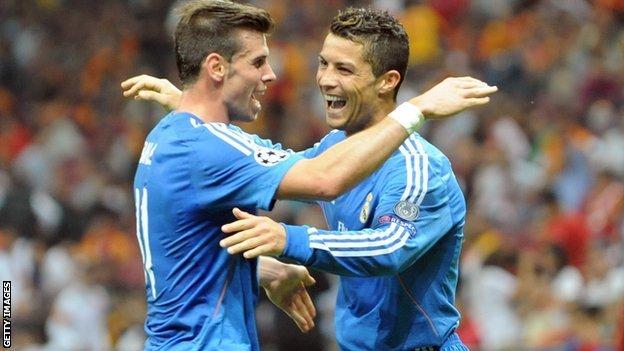 Wales forward Bale, 24, has only made one start for the Spanish club since joining them during the summer.

"We shouldn't put too much pressure on him. That's not good for him," said Portugal international Ronaldo.

It's not been easy for him, but you can see how excited he is to be here

"He always wants to learn. We have to try to help him, not put pressure on him, and leave him alone, as he'll be very good for the team."

Bale scored on his Real debut in September following his move from Tottenham but his appearances for the club since have been hindered by a thigh injury.

He made his first-team return when he came on as a substitute against Malaga on Saturday, winning a penalty which Ronaldo converted in a 2-0 win.

"Since he arrived he's had it a bit tough. He didn't have a pre-season and he was injured.

"It's not been easy for him, but you can see how excited he is to be here."

Ronaldo was speaking before Real play Italian club Juventus in a Champions League group game at the Bernabeu on Wednesday.

The Spanish side are top of their group with six points, while their Serie A opponents are second with two points.

"We have six points and no-one qualifies with just six points so we need to win the game," added Ronaldo.

"It's a very big game and whoever wins the match will get a huge boost. We are at home and we have to try and win."