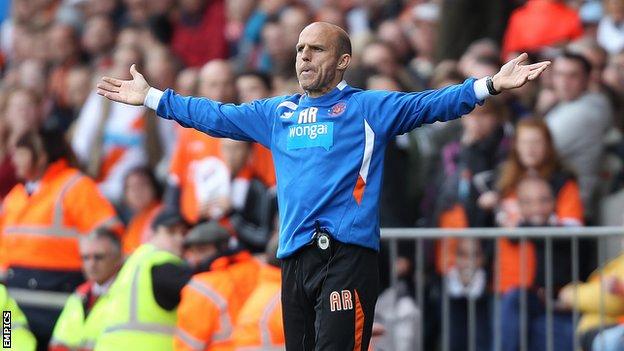 Assistant boss Alex Rae is confident he and coach Steve Thompson have the knowhow to lead Blackpool on matchdays in the absence of Paul Ince.

Manager Ince began a as the

"We've been in that situation ourselves so we know what we're doing," the 44-year-old told BBC Radio Lancashire.

"We spoke about the preparation work prior to the game. It's a full week that goes in and the players just have to implement that, and they did that."

Ince's suspension, received after he relating to incidents after the win at Bournemouth in September, prohibits him from entering any stadium in which his side are playing on the day of a game.

An FA report said former England midfielder Ince pushed fourth official Mark Pottage and repeatedly threatened to "knock him out" before being dragged away.

Saturday's 1-0 victory against Wigan was televised, meaning Ince was able to watch the match unfold. He was able to communicate with Rae via another member of his backroom staff and with the aid of a mobile phone and an earpiece.

The win, achieved courtesy of a penalty from the manager's son, Thomas, left Blackpool fifth in the Championship ahead of a Lancashire derby against Blackburn at Bloomfield Road on Saturday.

who made his first Blackpool start against the Latics, said: "The next five fixtures are all very tough, as they all are. I'm sure it will be another great atmosphere and another great game here."