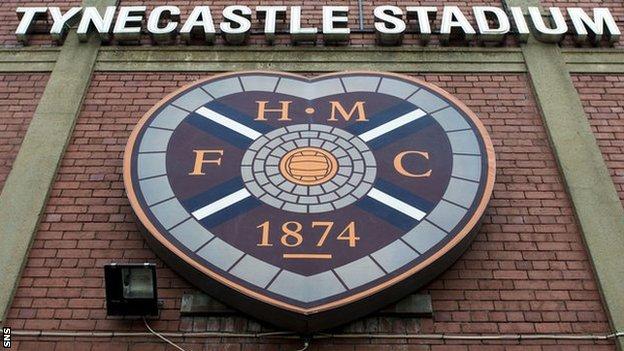 Hearts' administrators have received "positive news" as they seek to move the club into the hands of new owners but have urged "caution".

BDO can now begin the process of putting together a company voluntary arrangement offer to creditors.

The administrators of Ukio Bankas, who control around 30% of the club's shares, have given their approval for the process to begin.

Fans group for the club.

And the appointment of administrators to Hearts' majority shareholder, UBIG, is expected to take place on Thursday.

and, the following month, it was reported .

A 15-point penalty was incurred for suffering an insolvency event. Following , the Tynecastle outfit sit bottom of the Scottish Premiership - 13 points below Kilmarnock ahead of this Saturday's meeting of the two sides.

Commenting on Tuesday's developments, BDO's Bryan Jackson said: "This is positive news as it means that we can progress the CVA process immediately by initiating meetings of the creditors and shareholders.

"We will also be able to begin the formal acceptance of the Foundation of Hearts bid and legally agree terms.

"I would urge caution however that, although this is a further step in the right direction, there is still some way to go. There are a number of issues to be clarified and concerns addressed but we are at least progressing once more."

Gintaras Adomonis, bankruptcy administrator of AB Ukio Bankas added: "The zeal and tenacity of the fans have persuaded us that the process of CVA should be launched as soon as possible by the administrators of Heart of Midlothian FC.

"We are still far away from the end of the legal process which we all shall endure, but this is a step forward nevertheless."

And, in a statement, the Foundation of Hearts said they were "obviously delighted" and thanked both BDO and Adomonis.