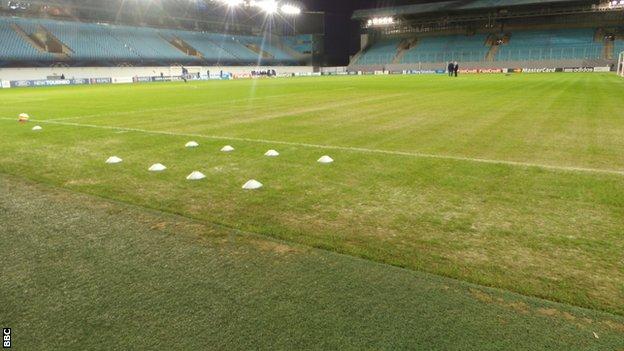 The Khimki Arena surface is in poor condition, rutted after heavy rain and it has been sprayed green.

"It's unbelievable the most important cup competition in the world is allowed to be played on this pitch," he said.

Why is the Khimki Arena's pitch so bad?

This, allied to heavy rain, has left the pitch sandy and rutted.

"I think the people from Uefa that viewed the pitch mustn't give the authorisation to play here."

Earlier this month, European football's governing body ordered the Moscow club to stage the home game against Viktoria Plzen in St Petersburg because of the condition of the surface.

CSKA's manager Leonid Slutsky agrees that the pitch is in a poor state.

Slutsky, whose side have lost five of their last seven games in all competitions, said: "I suppose the quality of the pitch is, absolutely, equal to the quality of our latest results."

According to BBC Weather, conditions in Moscow are expected to be dry and cloudy for the match which kicks off at 17:00 BST.

CSKA have not played at the ground since 30 August, and the all-weather surface at the city's Luzhniki Stadium is unavailable because of rebuilding work in preparation for the 2018 World Cup.

They were in the process of beginning contingency plans to move the clash against City to Krasnodar, 835 miles south of the capital, until Uefa confirmed 11 days ago that the pitch could be used.

Bayern Munich lead Group D with two wins from two games, while City and CSKA each have three points from two games after both sides recorded victories over Czech side Plzen.