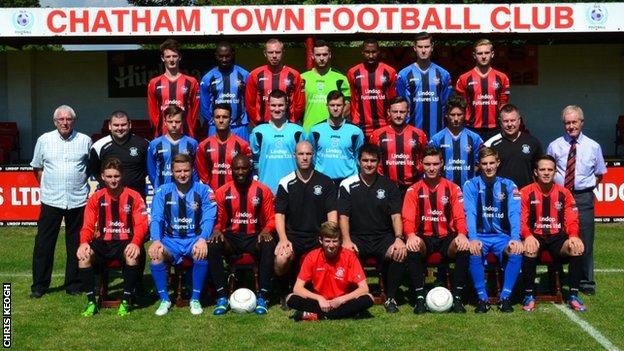 Chatham Town chairman Jeff Talbot says the FA Cup is a "dream" for his side as they prepare to host St Albans City in the fourth qualifying round.

Saturday's tie is the first time in 82 years that the Isthmian League Division One North club have come within one win of reaching the first round proper.

"The FA Cup for teams at our level is a dream - games like this is what it is all about," Talbot told BBC Radio Kent.

Chatham Town last made it to the first round proper of the FA Cup in 1928, where they lost 6-1 to Norwich City. The Canaries also got the better of Chats in the second round proper a year earlier.

Their best run in the competition was in 1888-89, reaching the quarter finals after needing two replays to get past Nottingham Forest. Holders West Bromwich Albion eventually knocked them out with a 10-1 win.

"This is the biggest deal we have had for the best part of 40 years."

Talbot added: "Being at a serious stage of the FA Cup means a lot to our finances.

"There is lot of community interest, lots of support and work for the board to do to get it staged on Saturday."

Chatham, who play in the eighth tier of English football, are struggling in the league with just three wins this term.

Chats manager Kevin Watson, who was part of the Team Bath side which made history as the first university side in 122 years to reach the FA Cup first round in 2002, says Saturday's tie represents a once-in-a-life-time opportunity for his players.

"A home tie is the great positive to come out of this and if we don't win the game we will feel aggrieved to go out to a team that is only a level above us," he said.

St Albans City's visit, which is anticipated to attract a crowd of more than 1,000 to Maidstone Road, will come as a huge revenue boost for a side that plays in front of an average home crowd of 150.

Already the club has earned more than £15,000 in prize money this season.

"It is significant money for the club," Talbot said.

"It will keep us afloat this year and more importantly it will go towards developing revenue streams so we will benefit from it for years to come."